Yes, dear readers. I’m on a bit of a baking roll (except I’m not making rolls) since I just baked Friday and it’s only two days past and I’m doing another bake and this week I know I’ll be doing at least two more. Maybe it’s like how people nest to prepare for a baby. I’m overbaking to prepare for Easter, when I said I would do a dessert for my high-maintenance family which will involve three different lemon sponges (gluten-free and dairy-free, gluten-free and dairy-filled, and glutenous and dairy-tastic).

So here we are and I’m keeping good on the goal within a goal that I set for myself last time by baking a recipe from the “puddings and desserts” section.

Questions for another time, I suppose.

For now, I have to get started on this because I didn’t realize it needs a lengthy chill time before baking. Thankfully I perused halfway through my Sunday afternoon and realized I may have just enough time to third this recipe for my mother and myself.

This is one of those tricky recipes where I have to serve it warm and to do so for work would require me to get up extra early and do this in the morning, and I’m just not willing to do that. Bed is too comfortable.

First up, prep the pudding moulds: 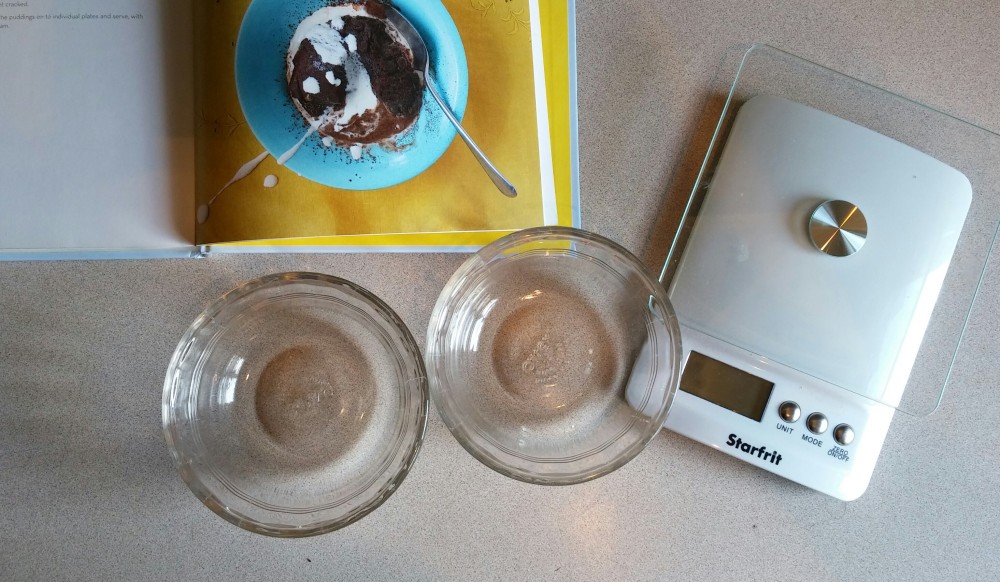 So I’m still not entirely sure what a pudding mould is, but since this recipe is just for my mom and me, I have fewer qualms about making it perfect. Thankfully my mom has little heatproof glass dessert dishes (because seriously mom kitchens just have everything), so I’m using those.

First I’m to grease it with butter and then I’m to line the inside with cocoa powder before chilling for half an hour:

I’m off to a successful start with this, my first pudding/dessert recipe.

Next I’m to gently melt butter and chocolate in a heatproof bowl over a pan of simmering water and, once again, my mother’s kitchen is more prepared than my own. She actually has a set of heatproof bowls for this very purpose. 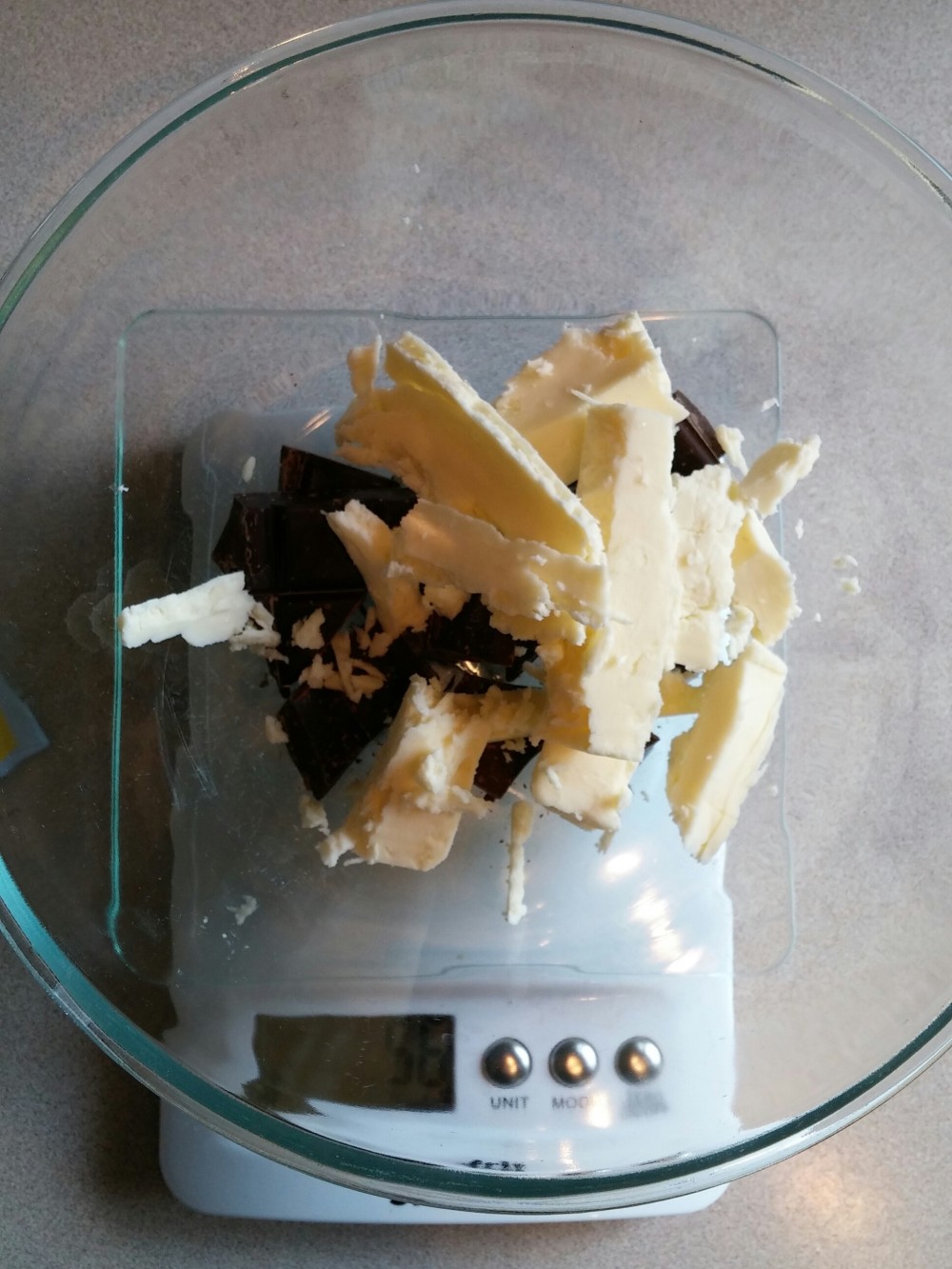 While that’s melting, I’m starting to put together the ingredients needed for the moussey egg mixture. I decided to third this recipe instead of half the recipe because it calls for three medium eggs and three medium egg yolks. It’s much easier to take one third of three eggs than it is to take one half. Plus it works out because this recipe would normally make six puddings, but with just two of us, it’ll make two.

Normally I am very skilled at separating eggs. I split the shell just in half so I can toss the yolk between the two shell bits until it’s sans egg white. But today I failed to crack it in half and instead lobbed off the top bit of the shell, forcing me to be a bit more hands-on in my separating approach:

It works. It’s just a little messy. And handling a raw egg yolk with your fingers is just a little bit odd. No? Just me that thinks it’s a gross feeling? Okay then.

This would be so much faster if I just opened an egg that magically had a second yolk:

This works fine, though.

Time to check on that gently melting chocolate!

Is it melting gently enough? I assume so if I was able to get the sugar and eggs ready like I’m on a TV show and everything is pre-measured for me.

With everything melted, it’s time to take it off the heat and stir until smooth: 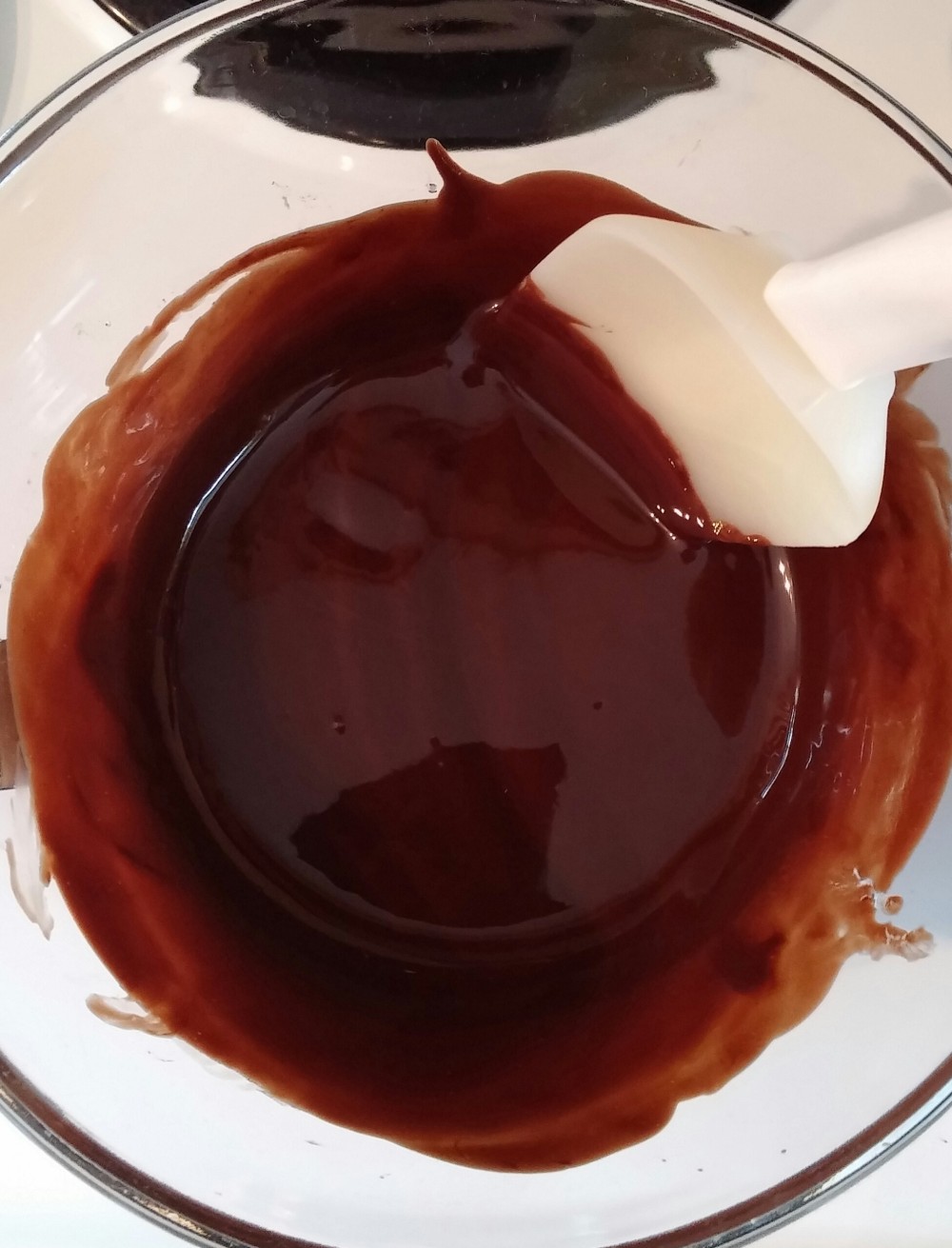 I’ve said it before and I’ll say it again, I love melted chocolate. It just looks so delicious and wonderful. No wonder Chocolat is one of my favourite movies.

Time to whip the eggs and sugar:

I’m to do this for “several minutes” or until it’s a “thick, pale and mousse-like consistency.”

Is that mousse-like? It’s only been a minute.

Is that mousse-like? The ribbon trails thing are happening. I think that’s a good sign.

Okay. Time to fold in the melted chocolate. 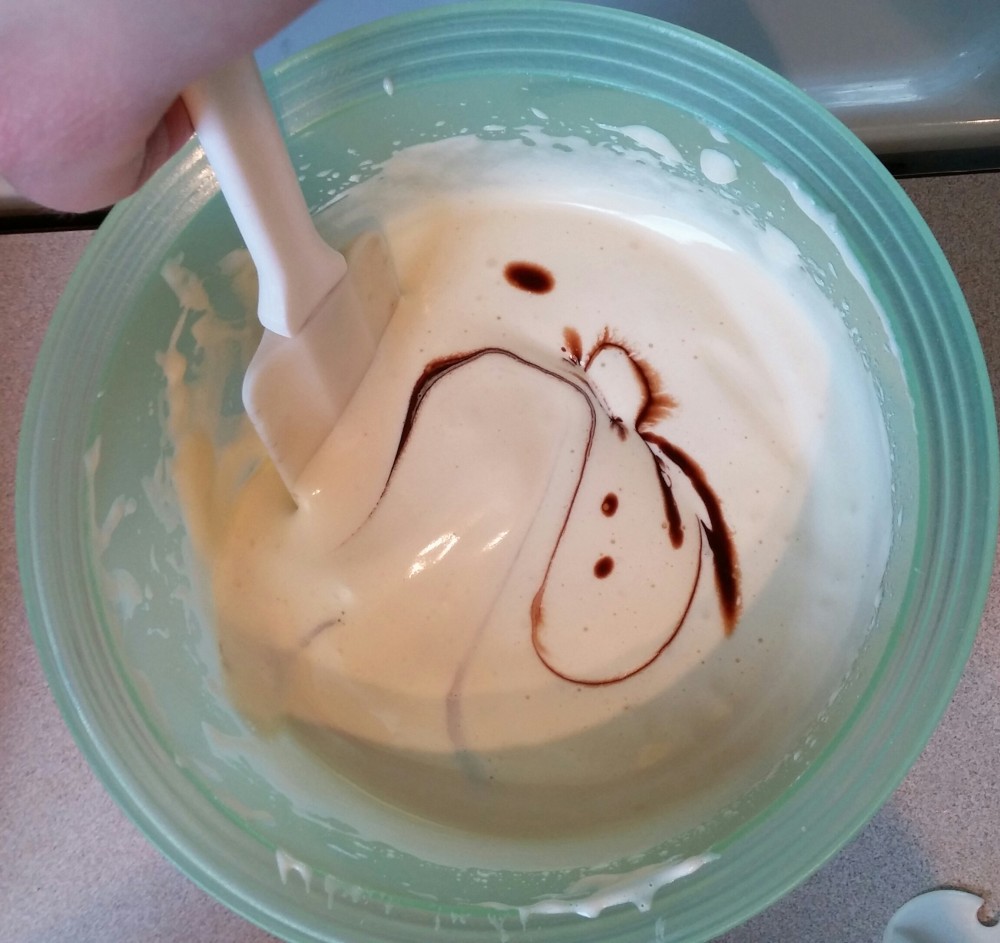 And of course all the buttery chocolate falls right to the bottom of the bowl.

I do love folding. It’s very relaxing. But it’s also the slightest bit stressful because I want to combine everything but I don’t want to deflate it. I have to try to mix it while also keeping it light and fluffy which takes some time.

Also folding takes a bit of arm strength. I hope by the end of this challenge I’ve set out for myself, I have one massively strong right arm and one weirdly small left arm. Like a true (right-handed) baker.

Or are true bakers ambidextrous?

Time to add a third of two tablespoons of flour:

Since this is my mom’s house, I’m using gluten-free flour and hoping this small amount won’t affect the integrity of the bake too much.

Keep folding, Paul says. Keep folding and “try not to knock any air out of the mix.”

Yeah okay, Paul. I know the stakes are high. I’m trying to be as careful as I can but I keep finding little pockets of flour. How? There’s barely any flour in here! Paul, I blame you for the pockets of flour in my moussey chocolate pudding mix.

Is a chocolate volcano a pudding or a dessert? I assume it’s more of a pudding. It seems pudding-y. I mean I say that with no clear understanding of what British pudding is. North American pudding involves a Jell-O packet and several hours in the fridge. Or pudding packs. Remember pudding packs? Oh schooltime lunches. How nostalgic you are.

I think I’ve found all the flour. Time to separate the mixture evenly between bowls:

I have a confession to make. One pudding is one gram more than the other pudding. It’s not even. I tried, guys. I tried so hard.

Now I have to wait until they’re firm. Paul gives no minimum time, but he does say it can be kept in the fridge for up to 24 hours. Oops. I guess I could have made these for co-workers. Sorry, guys! Maybe next time.

By the way, I know that this mixture is basically raw egg and you can get salmonella from eating it uncooked, blah blah blah, but it’s quite delicious. I’m looking forward to this one.

This whole lemon-curd-tipped-bowl technique is a good way to check the doneness of recipes I am super unfamiliar with.

Now to pop them into the oven for eight minutes. I’m trusting you, Paul.

Good luck, guys! I have no idea how you’ll turn out!

So I checked them and they do not seem done even though I’m a little fuzzy on what these look like done. Paul says until they’re risen but not cracked and they don’t seem risen.

When are these done, Paul?! They’re still rising. And they haven’t cracked. Maybe a bit longer.

Are they done? They may be. They’ve risen quite a bit and I see a hairline fracture starting in one. I’m calling it. 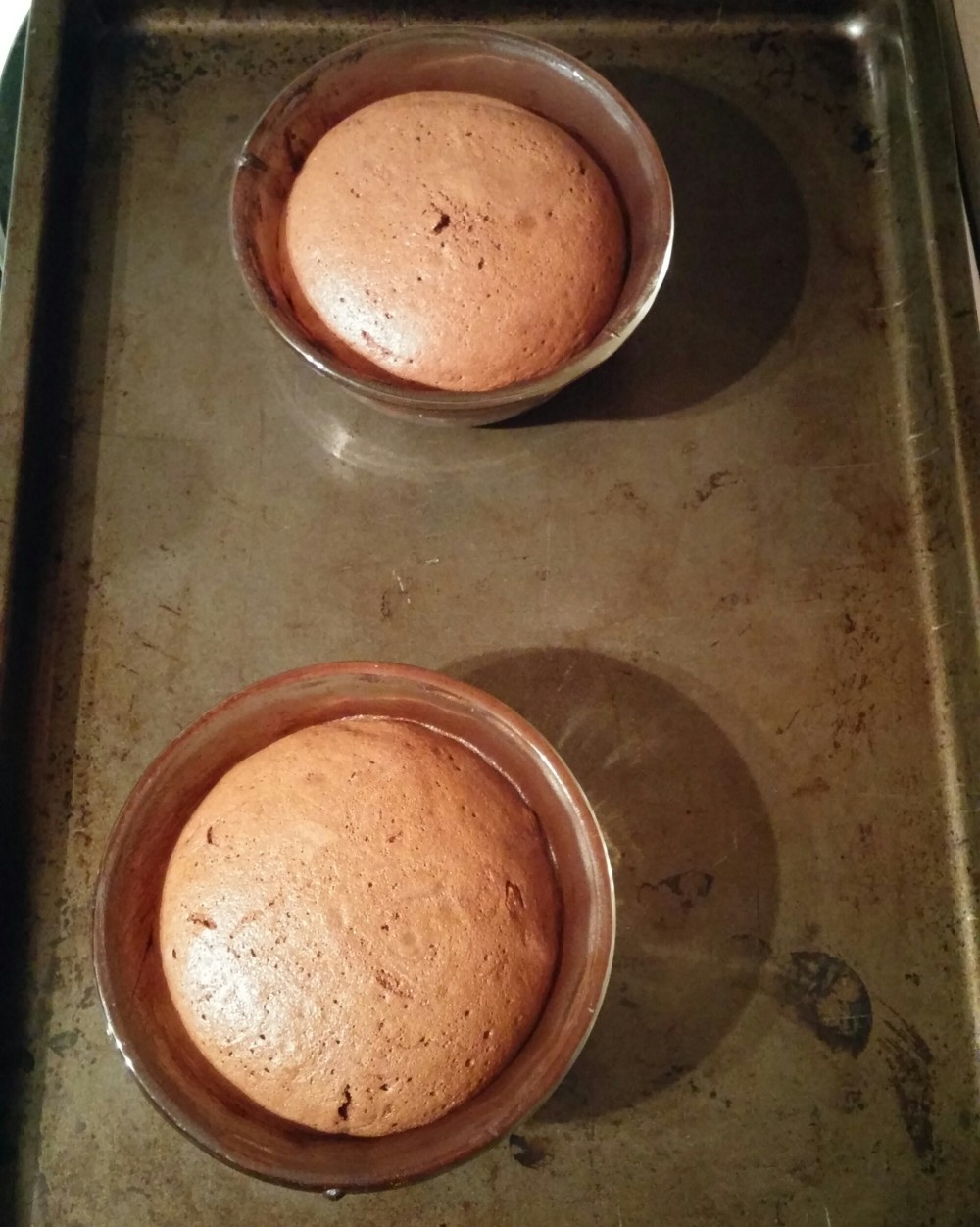 Now time to reenact the photo. Except, you know, I don’t have a professional studio to take food photos and when I try to get a similar angle, it’s just my shadow blocking the light and then I try to duck out of the light and it’s my phone’s shadow.

This’ll have to do.

Now to see how they taste.

Well, they’re delicious. They’re light and fluffy in texture but they’re rich in flavour. And they aren’t super sweet, but are absolutely scrumptious warmed with cream. I do wonder if they’re supposed to be more like a lava cake in the middle, but I don’t even care, because I like it. It’s not a cake. It’s definitely not a Jell-O pudding pack. It’s almost like a soufflé.

I quite enjoyed this one.