It’s the second day I’m staying inside to avoid snow, so I had to look through the recipe book for something I could (a) make with ingredients that are already in my house and (b) wait a few days to bring to people.

And I found one! And it just so happens that they’re on-theme with the frightful weather outside.

Snowball meringues! That apparently require a three-hour baking time, so I need more time than a workday evening would allow for anyway. 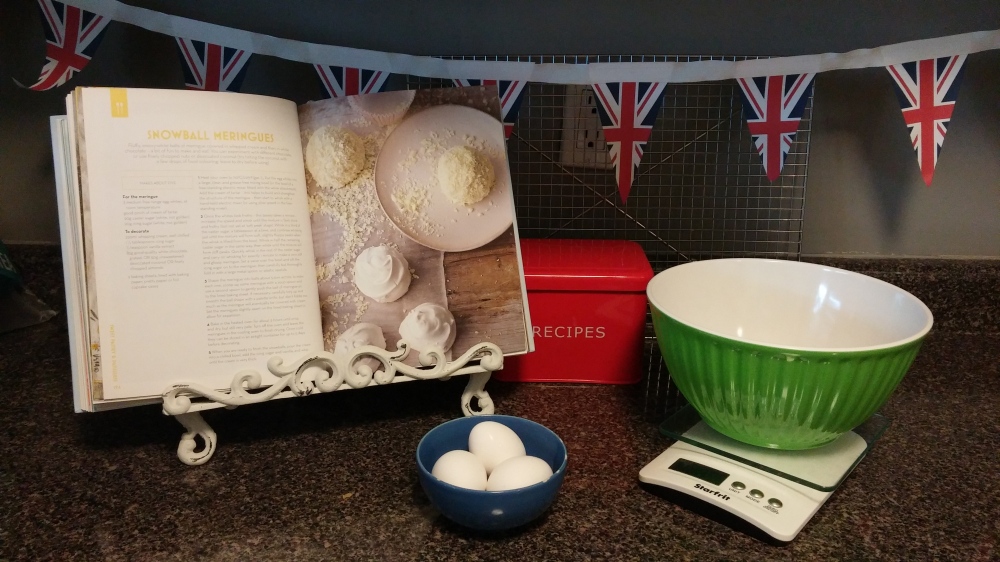 On your marks, get set, bake!

*less than half an hour later*

They’re in the oven.

Imagine if that’s all I wrote? No, I’ll reminisce for your benefit, even though this part went a lot quicker than I thought.

First I had to get my ingredients together. The main ingredient being, of course, egg whites. Room temperature egg whites.

Ah, room temperature eggs. My nemesis. The thing I am never prepared for. I wonder if Mary and Paul expect everyone to have room temperature, farm fresh eggs instead of what most of us have: fridge temperature eggs purchased from the grocery store like a city slicker. Not all of us have farms, Mary and Paul. In fact some of us barely have a patio, never mind a yard. But I do still have that trick up my sleeve thanks to a friend’s mom and I ran the eggs under lukewarm water until they warmed up enough.

Then I separated them. 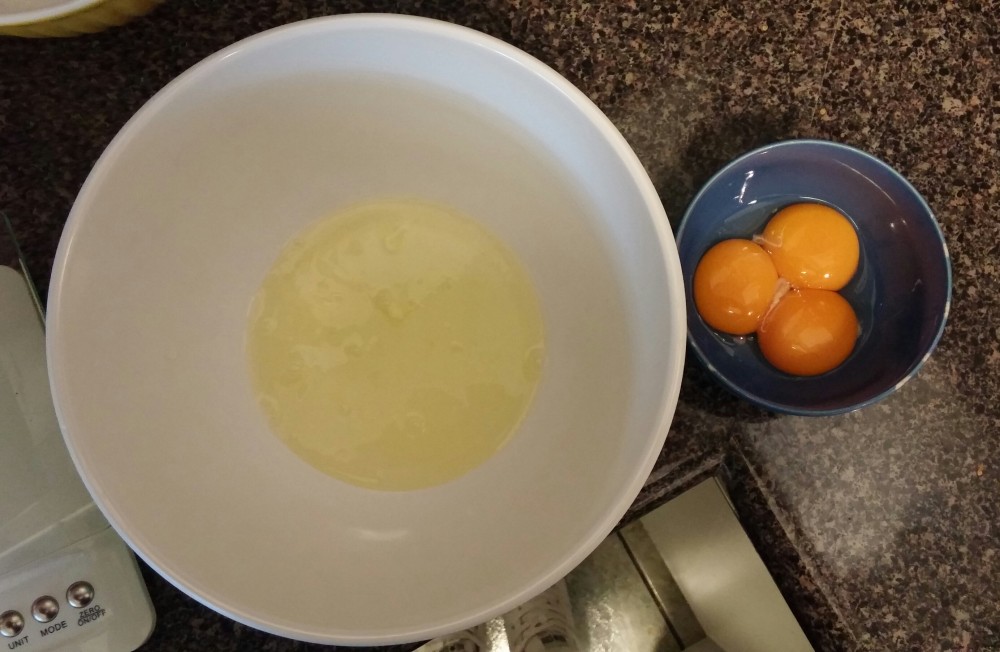 Then I added “a good pinch of cream of tartar.” A good pinch. What’s a good pinch, Mary and Paul? Whose fingers are doing the pinching? If it’s Mary’s tiny fingers, I can see it being a smaller pinch in comparison to my hands. If it’s Paul, well maybe a pinch is a handful. (Unless he has shockingly small hands.) Why the vague instructions, guys? 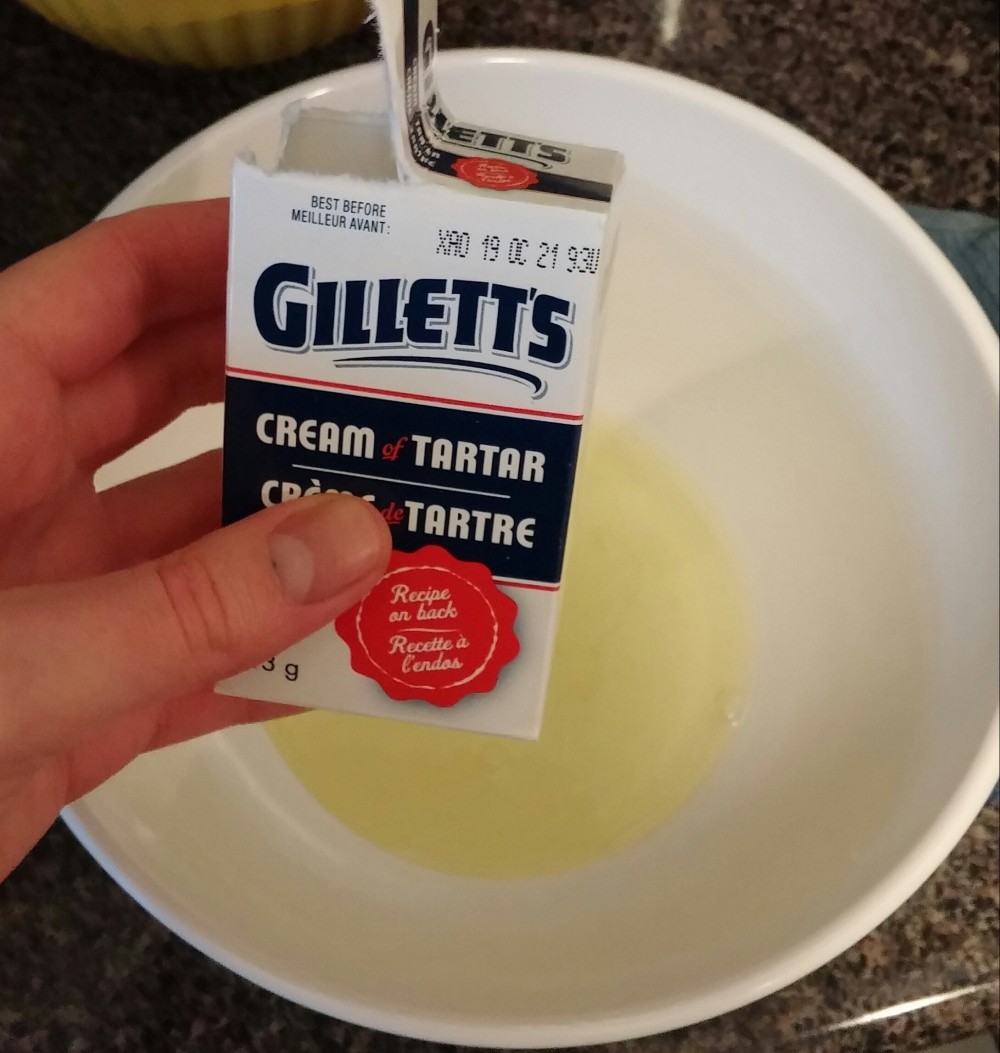 To be safe, I added a pinch and a half, hoping that together it was good enough for this meringue.

Then I read and reread the second step about a dozen times, hoping I would get the timing right before diving into the meringuing process. 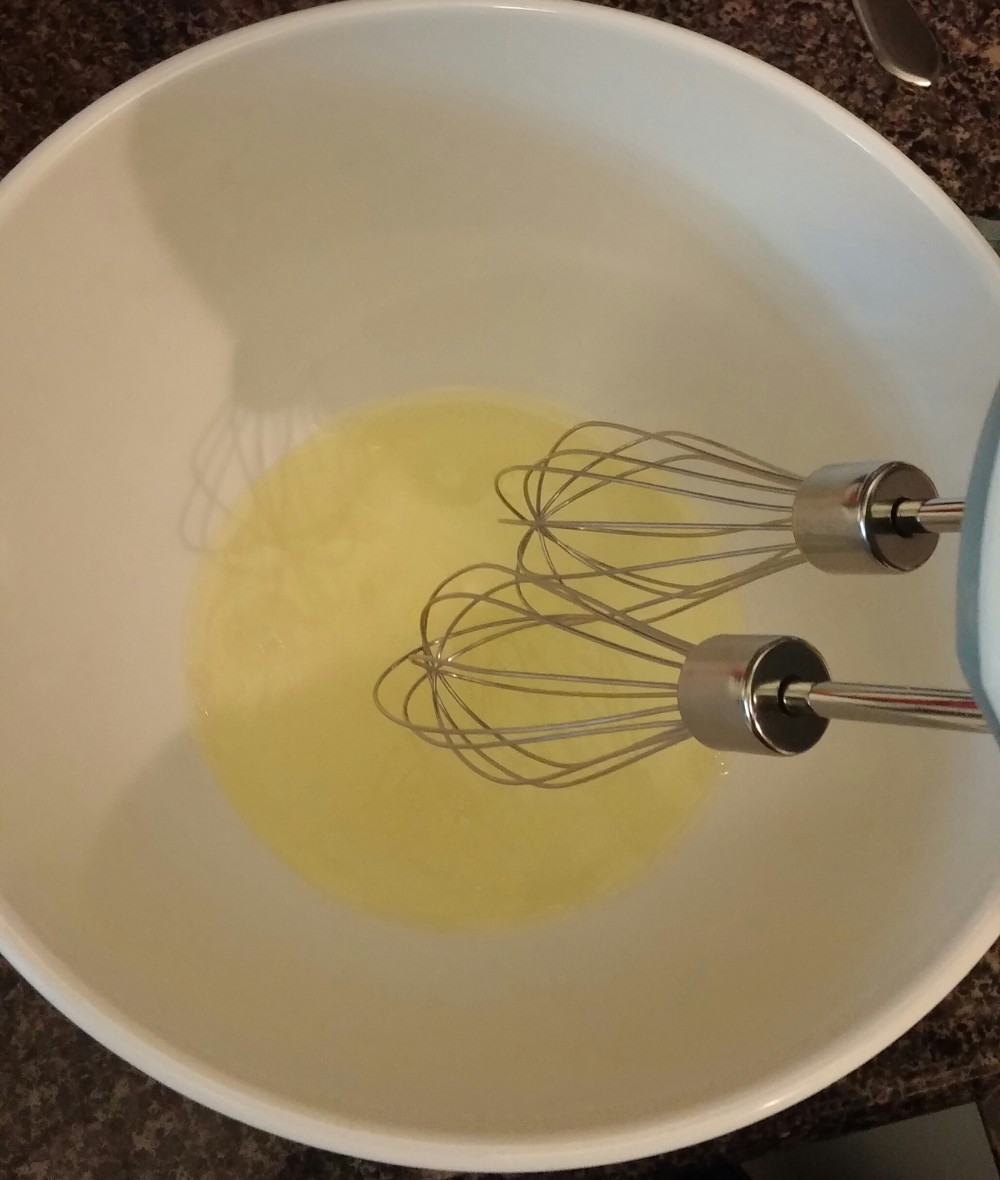 First, they wanted me to whip the eggs for about a minute until “fairly thick and frothy.” 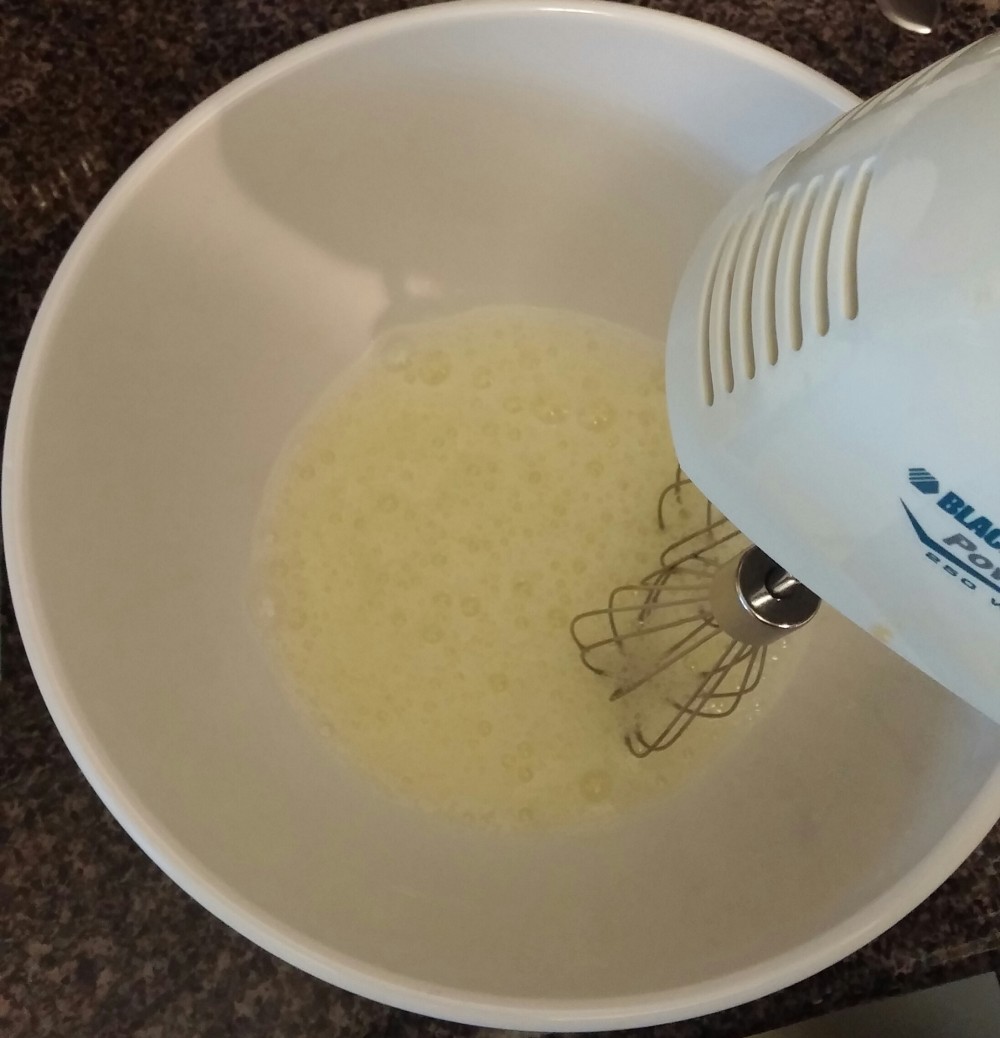 Then I had to add a third of the caster sugar, one tablespoon at a time, until the mixture formed “soft, slightly floppy peaks.” 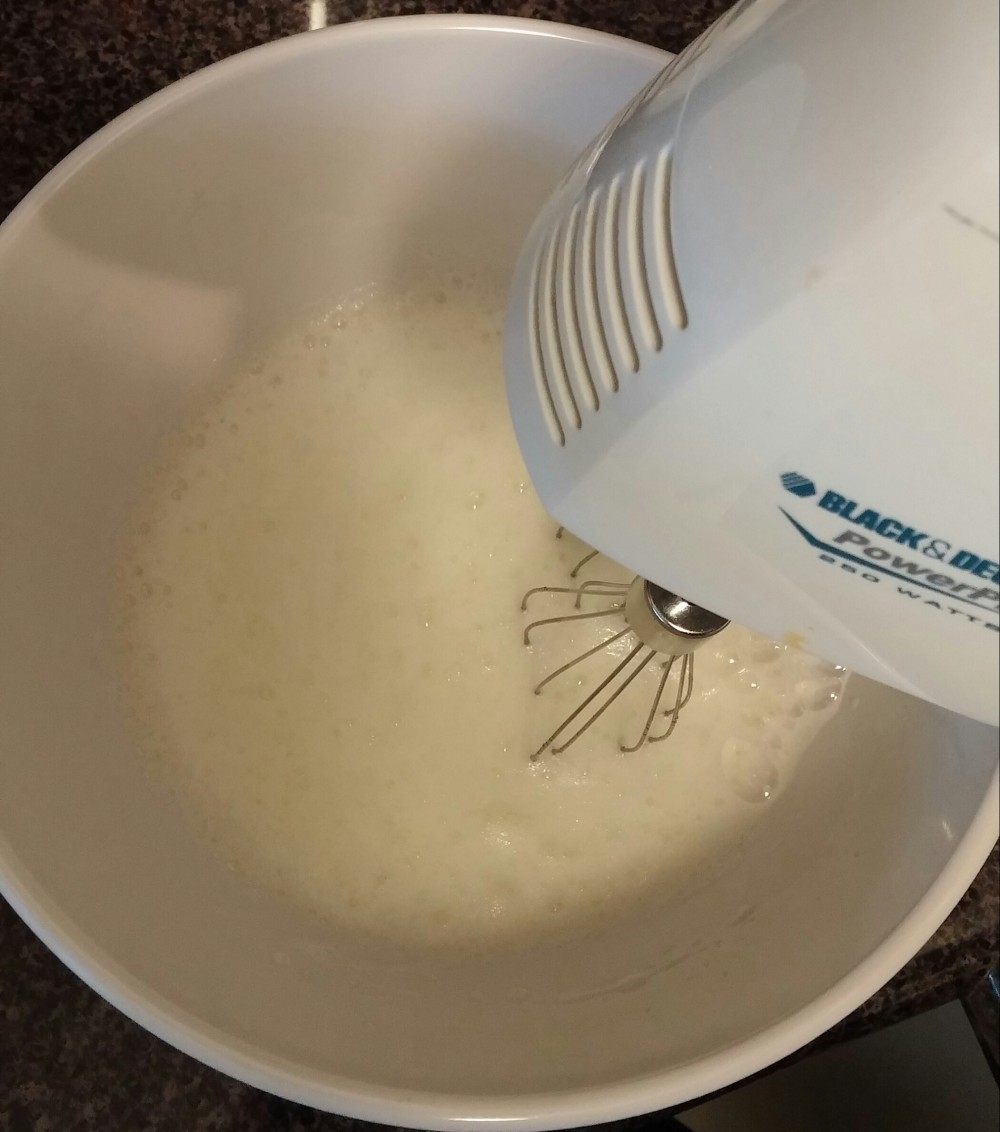 Then I had to whisk in half the remaining caster sugar the same way until the mixture formed stiff peaks. 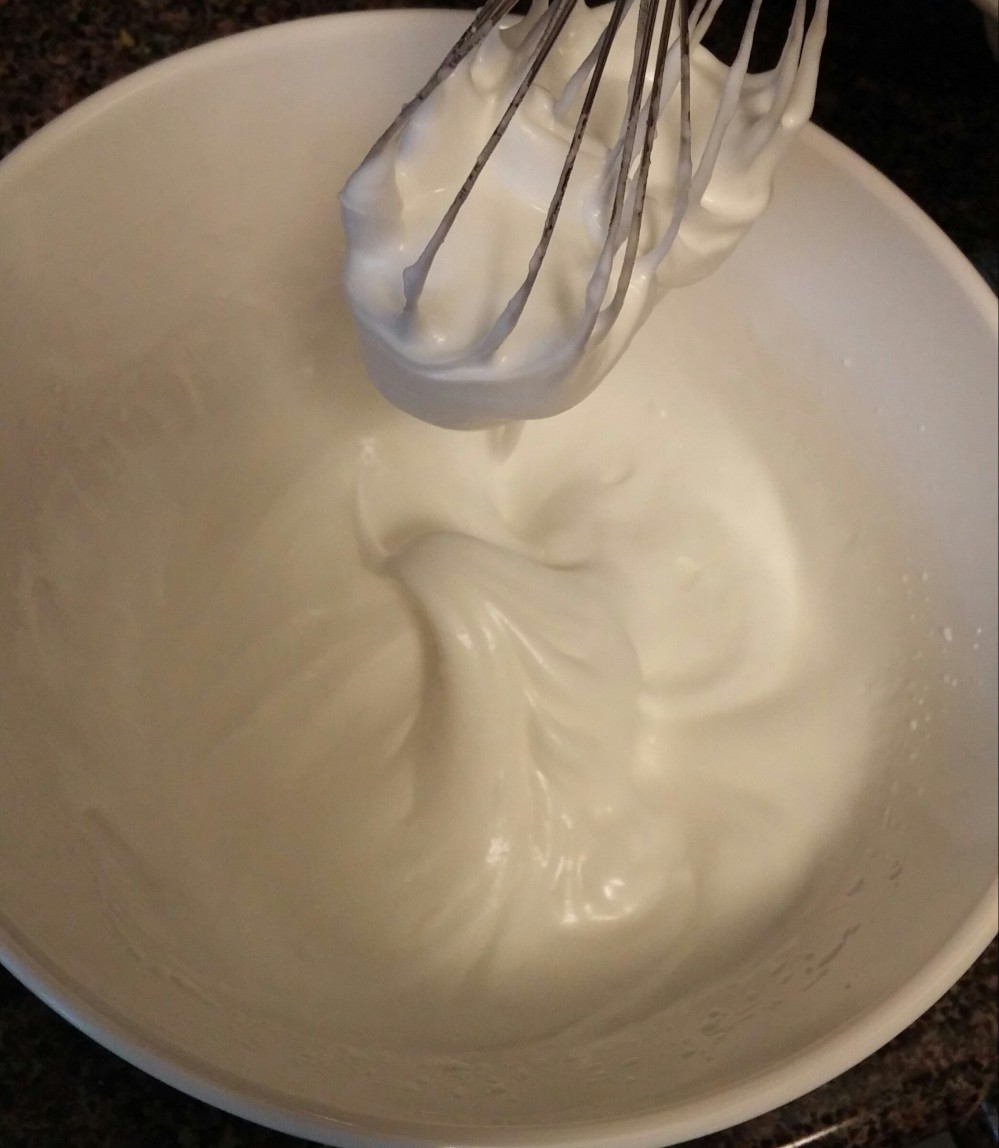 Then I had to quickly whisk in the remaining caster sugar for “exactly 1 minute” to make a very stiff and glossy meringue. 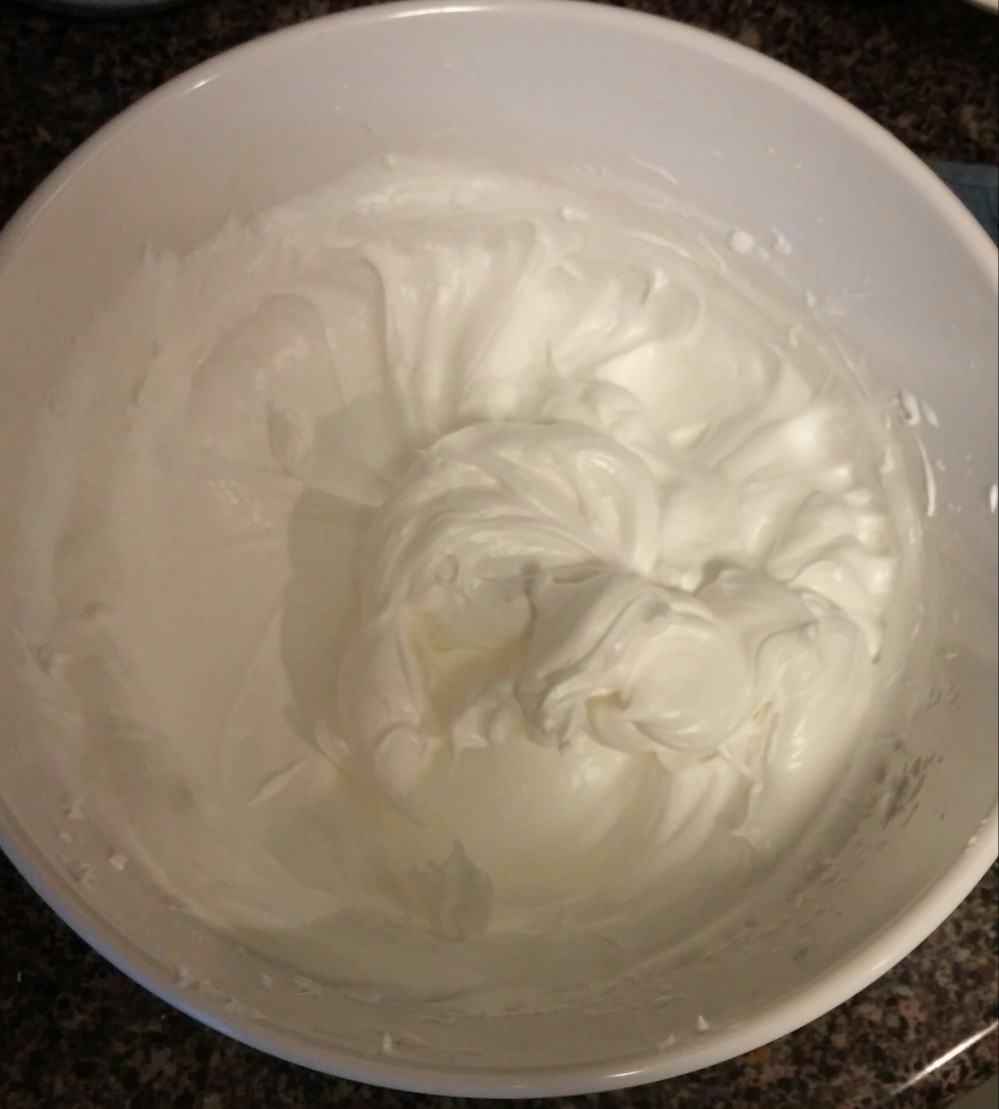 I hope that was exactly one minute. I tried to use the timer on my microwave but it didn’t work.

And then I had to sift the icing sugar into the bowl: 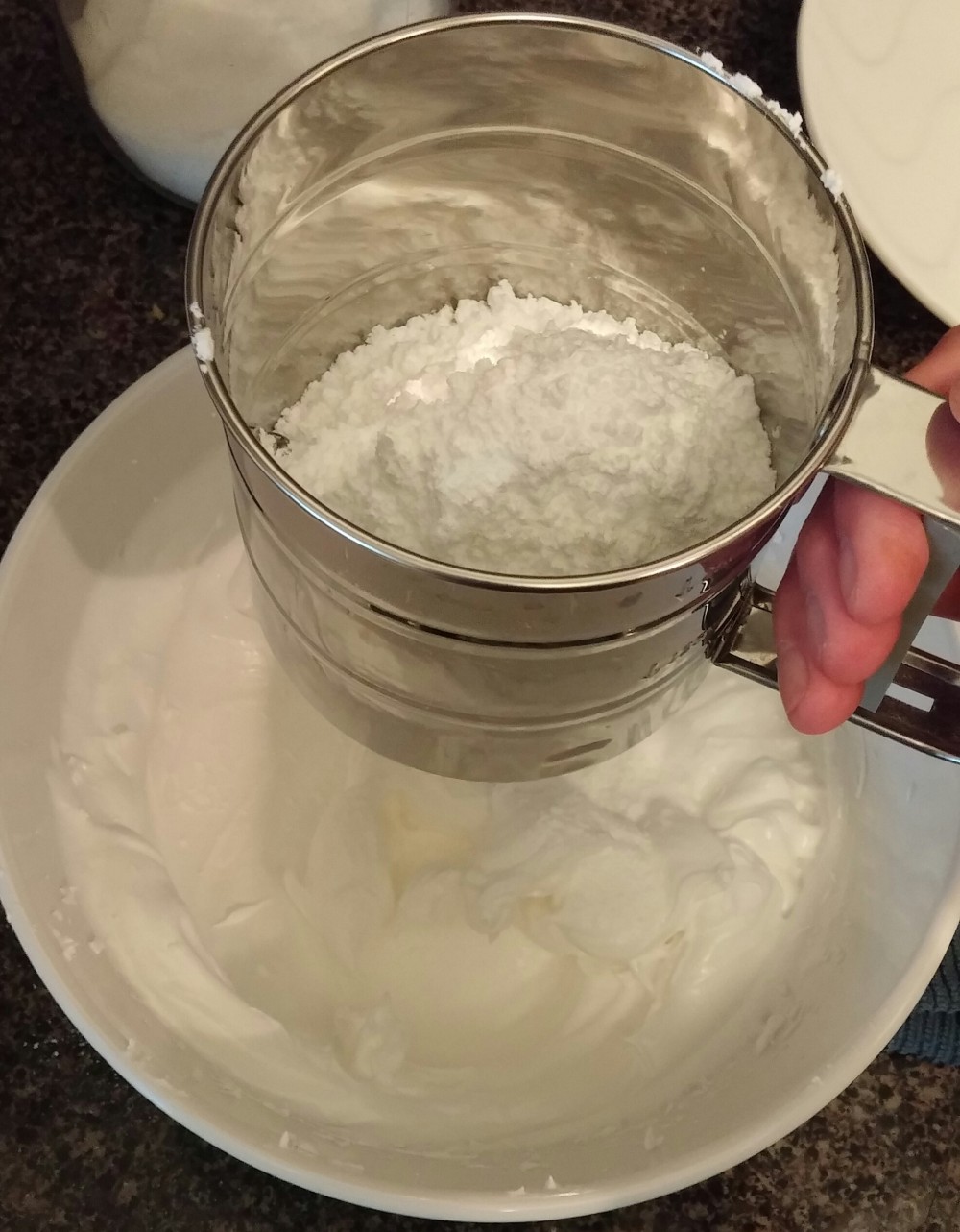 And fold it in “carefully but thoroughly.” 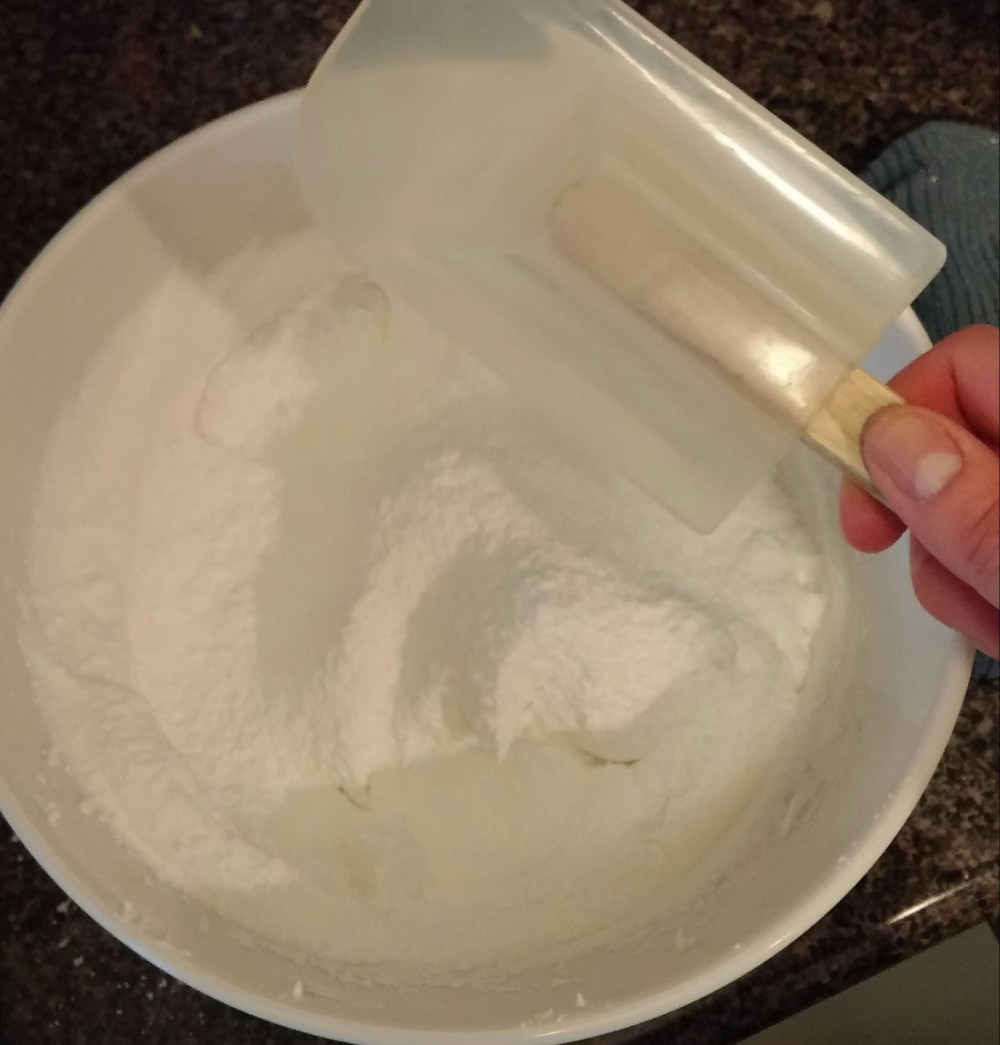 This was the stressful part because there’s a fine line between just spatula-ing around the edges and crushing the mixture. It requires some patience and since I’m less accustomed to meringue folding than I am to chocolate folding, this was less relaxing and more, “Oh man oh man oh man I hope this doesn’t ruin it.” 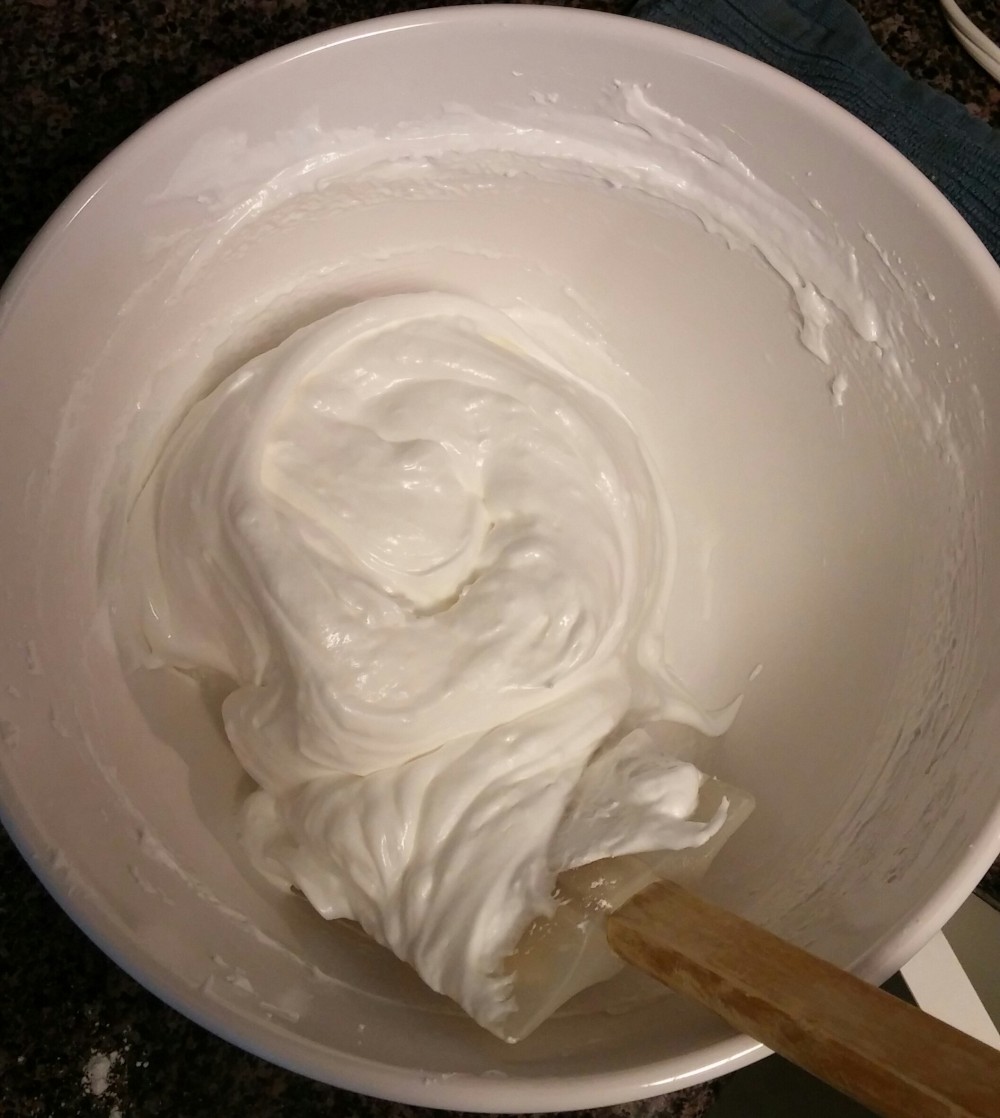 Then I had to scoop out the meringues into “about five” balls “about 5.5 cm” across.

To make sure I was being precise, I measured out 5.5 cm and then measured something that I could quickly use as a standard: my pinky finger. But the mixture kept going, like it was more than it should have been, so I ended up with a few more than five:

I wonder if using large egg whites instead of medium egg whites made that much of a difference.

And then they told me to tidy up with a palette knife if I thought it was necessary. Well (a) I have no idea what a palette knife is and (b) I have no idea what they think is necessary tidying. I tried to clean up the pointy peaks, assuming those would hurt if you bit into the meringue the wrong way. Mary and Paul tell me not to fiddle too much with it because these will be covered with cream.

And finally I was told to put it in the preheated oven for about 3 hours until crispy and dry but still pale. So now I wait.

As mentioned, meringues are not something I’m very familiar with, so this bake is filled with doubt. I’m also not entirely sure what a correct snowball meringue is supposed to taste like, so we shall see how this turns out.

I’m not sure what to add here. I turned off the oven a little over two-and-a-half hours later when they started to crack a bit, and now I’m waiting for them to be cool enough to store in an airtight container until I can decorate them.

It’s not a super exciting blog post, this one.

I can only apologize.

So I had a choice. I could either take the undecorated meringues to my mom’s and decorate them there so I could share with her and my nephews, or I decorate them at home with shredded coconut that I can’t remember when I first put it in my cupboard. So to my mother’s house I went! (And into the compost the questionable coconut went.)

Once there, I chilled the bowl, as per the instructions, and started the whipping process. Well-chilled whipping cream, icing sugar and vanilla extract. 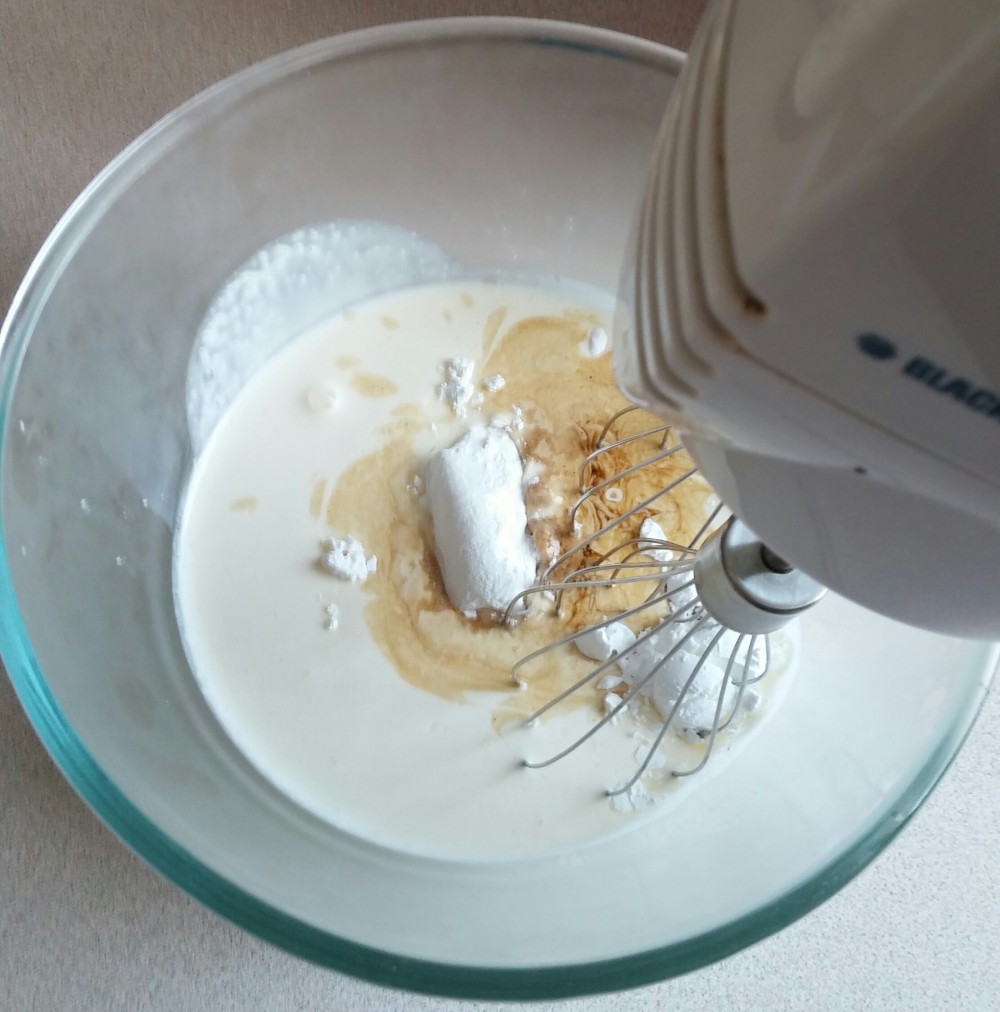 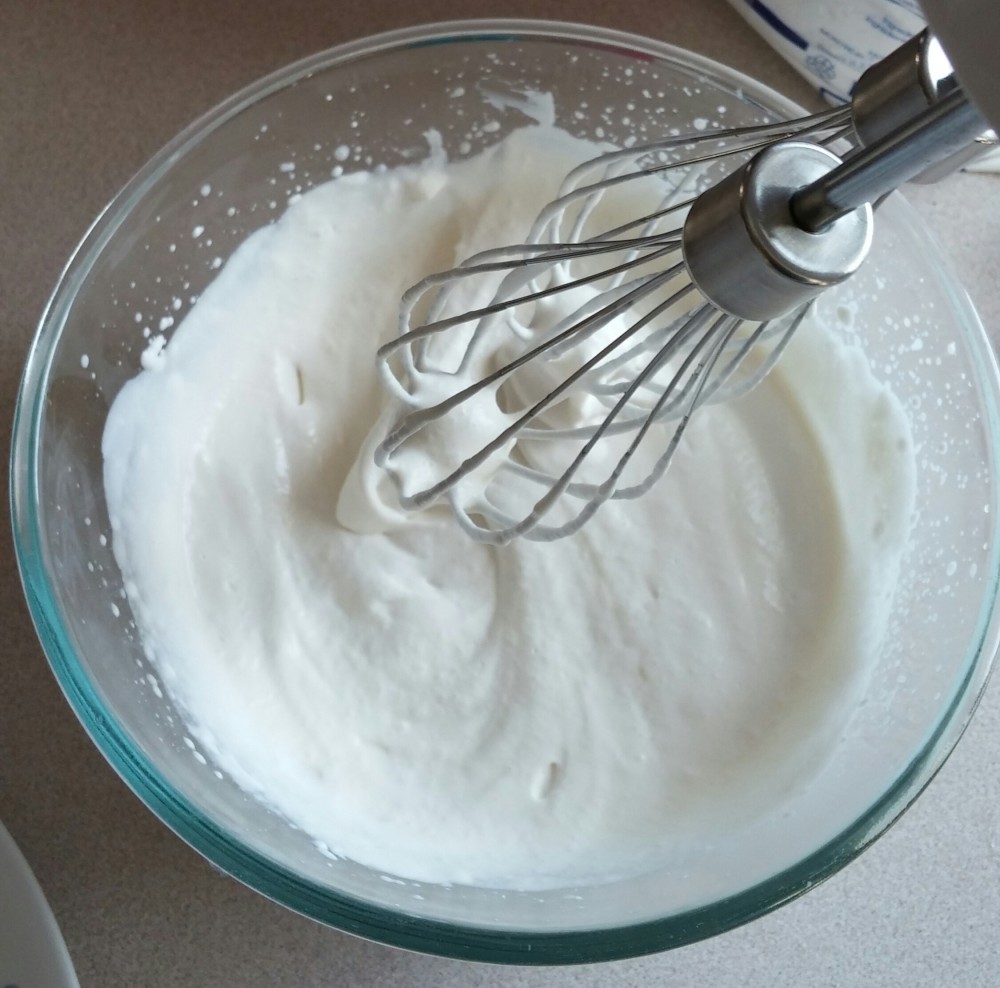 Is this thick? What does that mean? Does thick mean that peaks form? Why did we stop referring to specifics when it comes to the icing, Mary and Paul? I assume it just has to be thick enough to spread on top of the meringue, so let’s hope this is sufficient: 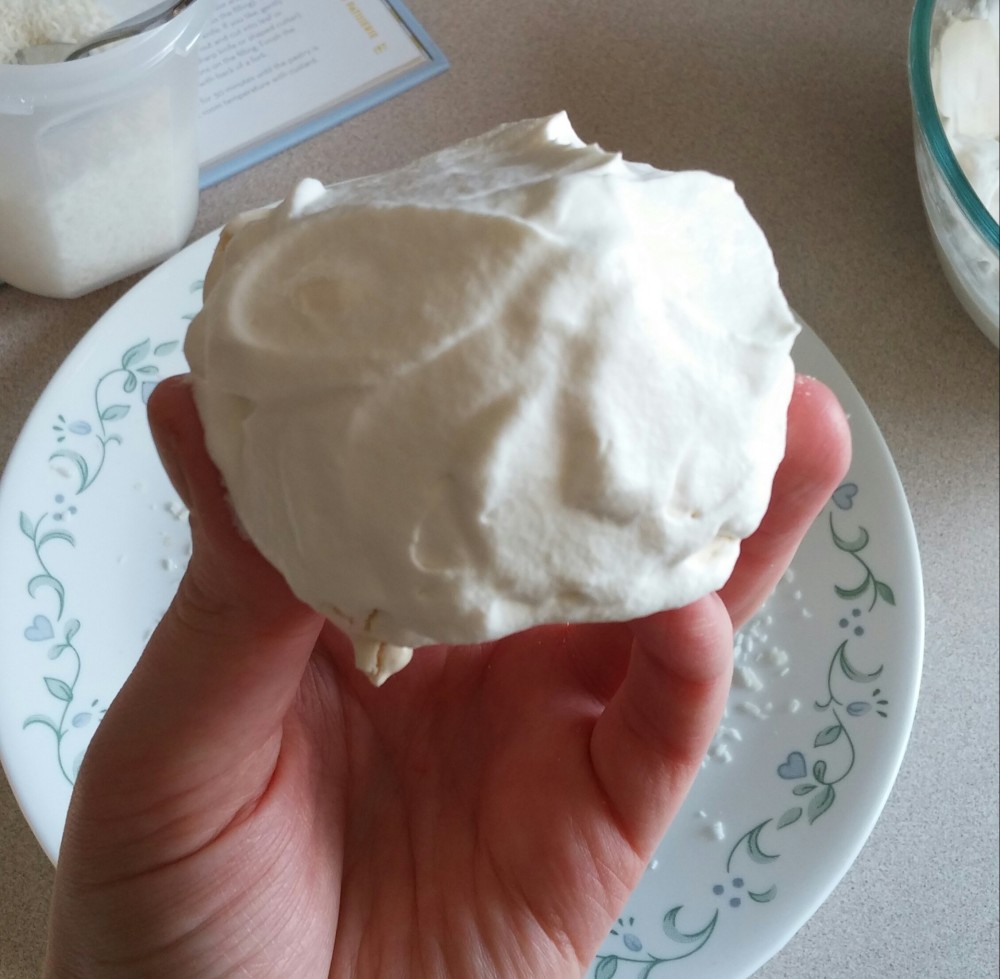 And thank you, Mother, for having shredded coconut in the cupboard. 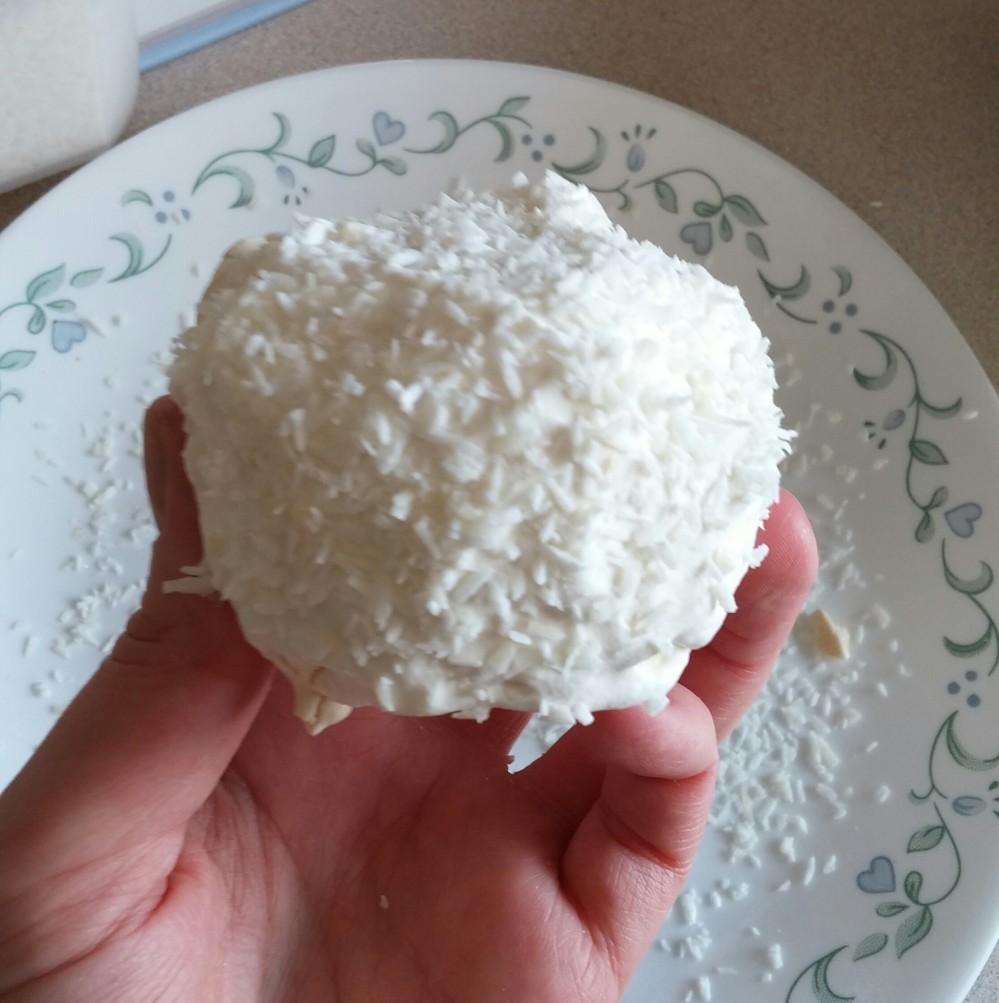 What is it about mom cupboards that they’re always well stocked? My cupboards are more often than not bare, but my mom’s are always filled to the brim with every possible variant of ingredient you’d ever need.

Saved me a trip to the grocery store!

Nine snowball meringues, ready for the nine family members who are able to consume both sugar and dairy. (That’s not all of my family members, if that wasn’t obvious.) 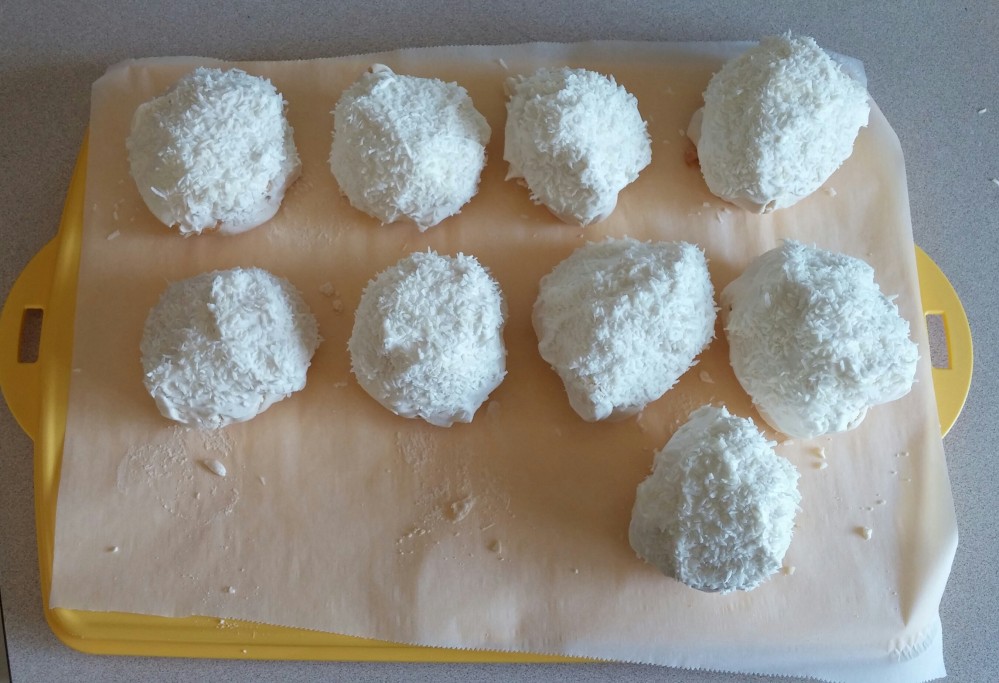 In case you were wondering, they were delicious. My sister has more than once made meringues, and she said they turned out great: crisp on the outside and slightly soft on the inside. And my five nieces and nephews gobbled them up faster than my co-workers have in the past, so that must be a good sign.

And as someone who doesn’t overly love meringue (it reminds me too much of cotton candy in its potent sweetness), I thoroughly enjoyed it!

Sorry if this wasn’t a super interesting blog post.

As a final addition, I’ll just explain how my two-year-old nephew ate his. Instead of picking it up and taking a bite, he pinched the icing and coconut on top and licked his fingers. He then continued to pinch his way through the meringue, ending up with meringue crumbs all over his hands, face, plate and table. When his dad came to sit with him, he got real protective of his meringue. And when his older brother started licking his own fingers and dipping it in the crumbs on the table, the two-year-old joined right in. In short: they’re all adorable and they all enjoyed the meringues.

Note to self: these would probably be delicious as mini-meringues, plus you’d get a lot more than nine (or five, if I were to follow the recipe correctly).