Well it’s just the only reason I purchased poppyseeds several months ago!

I was going to bake it earlier today but other things came up so now it’s after 5 p.m. and I’ve done the first step. But fear not, dear reader! There’s a parentheses rising option for round one:

(or overnight in the fridge)

So overnight in the fridge it is!

According to Mary and Paul, this particular recipe uses 1.5 kg of flour, allowing you to “make a batch of bread for a week” so you can enjoy “sandwiches and toast,” and then you can also either make another loaf for freezing or make “rolls for soup.” They’re very specific about how you’re to use this bread. I assume it’s fine to use it any which way as you would normal bread, but perhaps this is strictly a sandwich, toast, soup situation.

If it is, it’s just asking that we break the rules, don’t you think?

Although, what else do you use bread for?

*pauses to think of any other purpose for bread*

You can feed birds!

Although that’s a really wasteful thing to do with a homemade loaf plus a dozen rolls.

So instead I’ll just make this massive batch of bread and buns and pass them on to the only gluten-eating sibling in my family because, much like the issue I had when I made sourdough, it feels so strange bringing a loaf of bread to my coworkers.

“Here, enjoy this with nothing on it,” I’d say.

So instead I’ll say, “Here, enjoy this thing filled with gluten” to my sister and her family.

Now, back to the recipe. As I mentioned, this recipe calls for 1.5 kg of bread flour, but you only have to use 1 kg of flour in part one of the recipe.

Also because of the massive amount of flour and the fact that I am sure I could have beaten the machine last time, I decided to do this all old-school a.k.a. by hand. 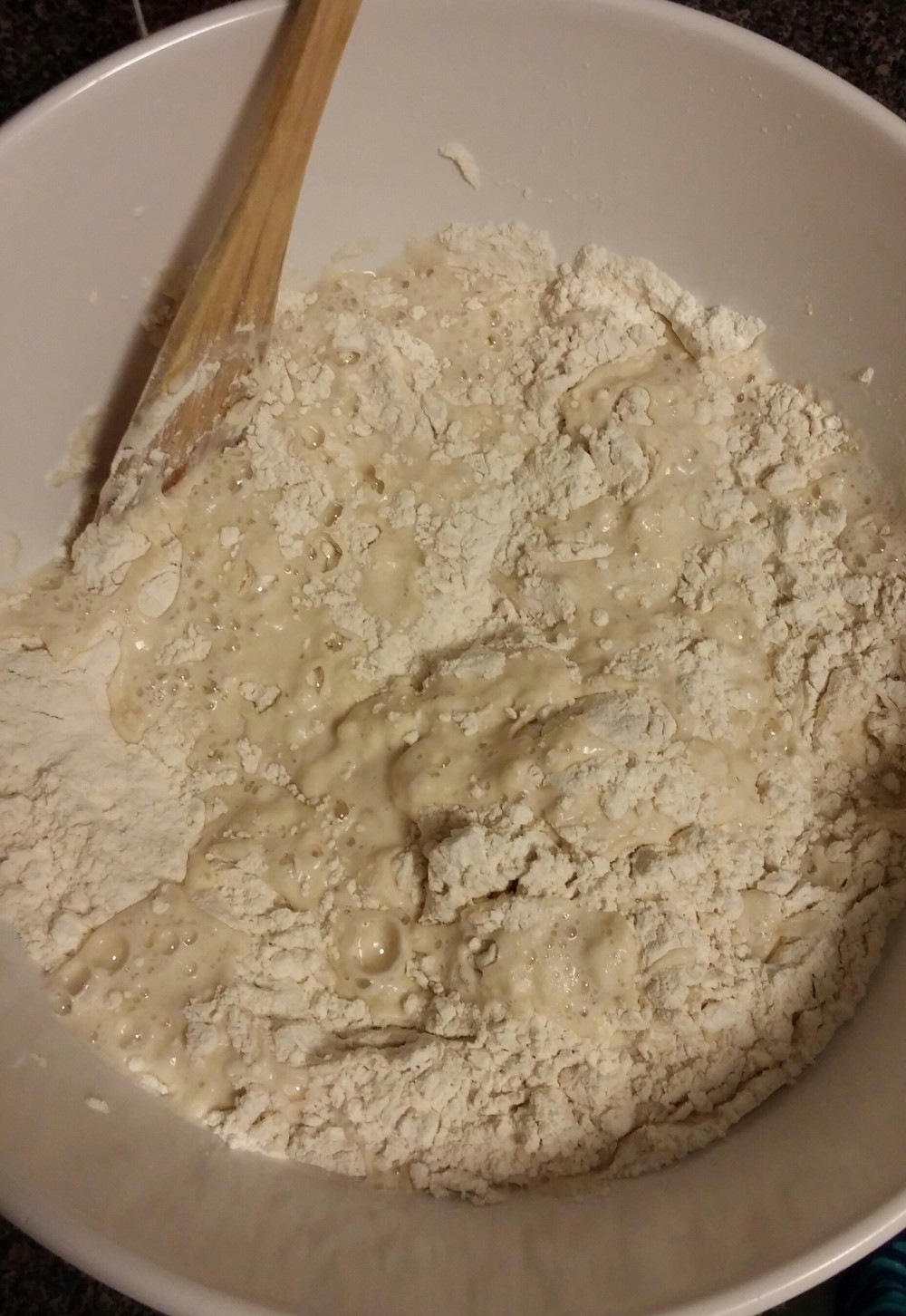 Turns out mixing this much flour and water together is actually pretty difficult. I gave it a solid effort with the wooden spoon (even though it’s not actually a spoon; it’s more of a wooden spatula, I think). But it became evident very quickly that the spoo-atula was not going to cut it:

Time to do this, folks. 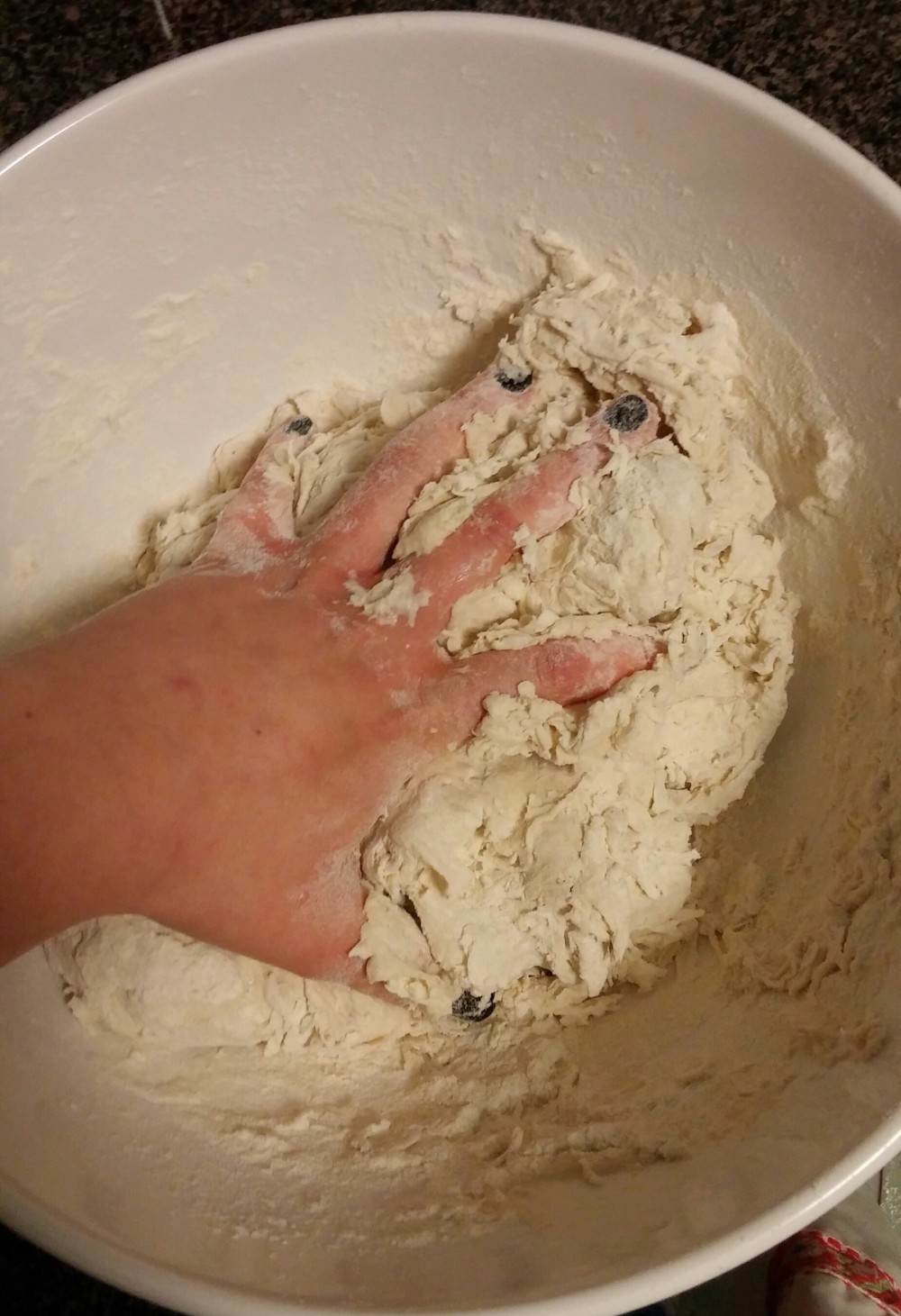 Also, ten minutes kneading time is a really long time. I now remember why I used the machine for the jumble loaf. Kneading by hand takes forever!

When I made the sandwich bread, I was happy to knead by hand because it was after a particularly stressful work day. But this time, it’s at the end of a particularly uneventful Saturday. You don’t build the same kind of stress when you spend part of the day finishing The Crown in your pajamas and the other part of your day having lunch with your family. Unless you have a stressful family, in which case you may need to knead out your frustrations.

But alas I didn’t. So this kneading time took for-ev-er.

This was only three minutes in:

And all I could think was, HOW HAS IT ONLY BEEN THREE MINUTES?

But onward and forward and nevertheless she persisted. And by the time it got to 9 minutes, I was pretty proud of myself, until I realized how long that last minute was.

On a totally related note, do you ever fear that you don’t know how to knead? I’m just moving the dough around, putting all my minimal arm strength into it and hoping for the best. I rotate it, fold it, put my palms into it until my wrists feel the pain and then start kneading with my knuckles, until I heard my knuckles crack unexpectedly, so I went back to palms and rotating. Is that how you knead? Is it too late to ask?

Ten minutes finally finished and I put this Dough Part I back in its bowl:

A bowl that I have to admit something about. Dear friends, this used to be my compost bowl. It has been thoroughly washed and through the dishwasher multiple times. It has no smell and no stains, but I feel the need to explain that before I discovered the mini compost bags, this was my countertop compost disposal system.

Now just to wait an overnight and a bit.

I made a mistake.

Not like a “put 999 grams instead of 1000 grams of flour in” mistake but more like a “put all the yeast in the first batch instead of dividing it between the two batches” kind of mistake.

Also I forgot to add the salt in with the dry ingredients so I added it in after I mixed in the water. 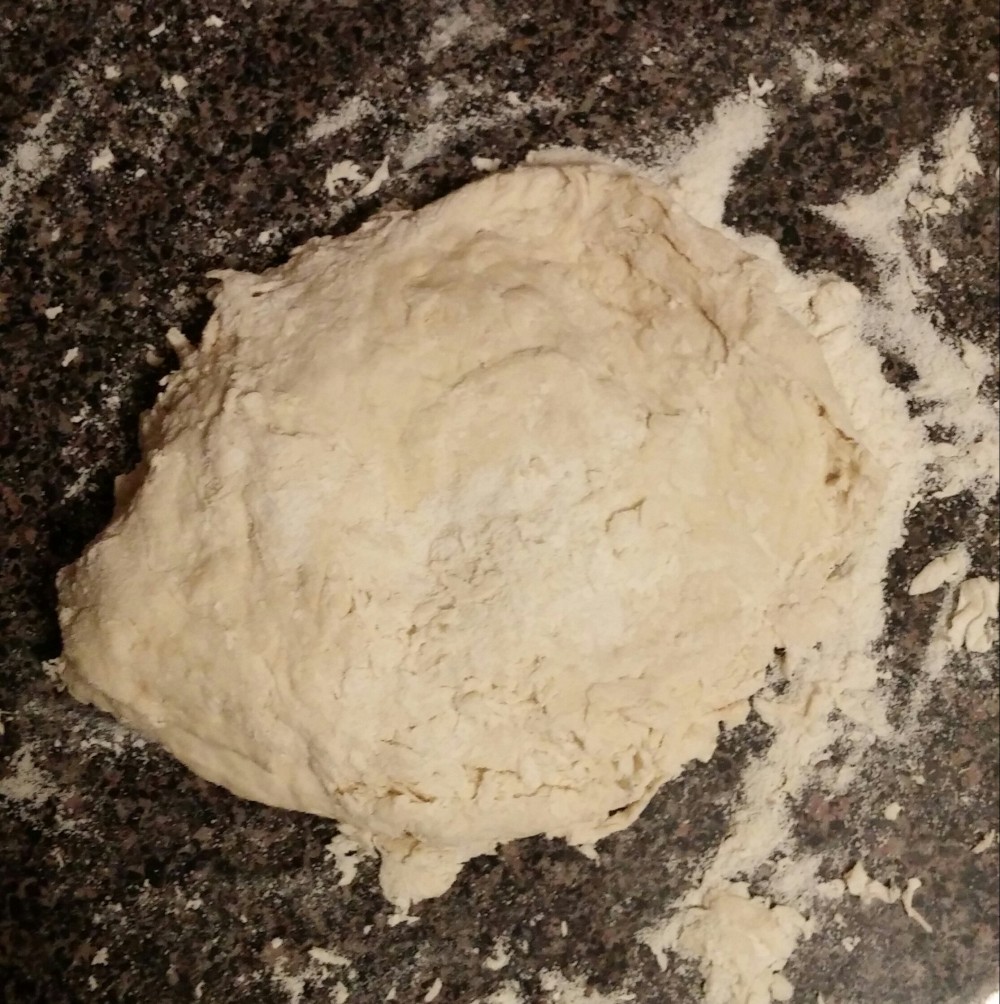 Good news is the first batch rose quite nicely. Probably due to the fact that it’s got twice as much yeast as it needed:

And it turns out mixing cold, super yeasty dough with dry, not-so-yeasty dough is a difficult endeavour.

Paul and Mary said for five minutes until incorporated, but it needed more than that.

It yelled at me and then unhooked the bowl from the frame just to add insult to injury. Even though we’re in the middle of a war, KitchenAid, it doesn’t mean you have to taunt me.

Although I guess that’s exactly what it means.

After all that, I got to a point of “good enough” and now I’m following their direction to let the dough sit under clingfilm for 15 minutes while I clear out my dishwasher and deal with my sink o’ dishes. 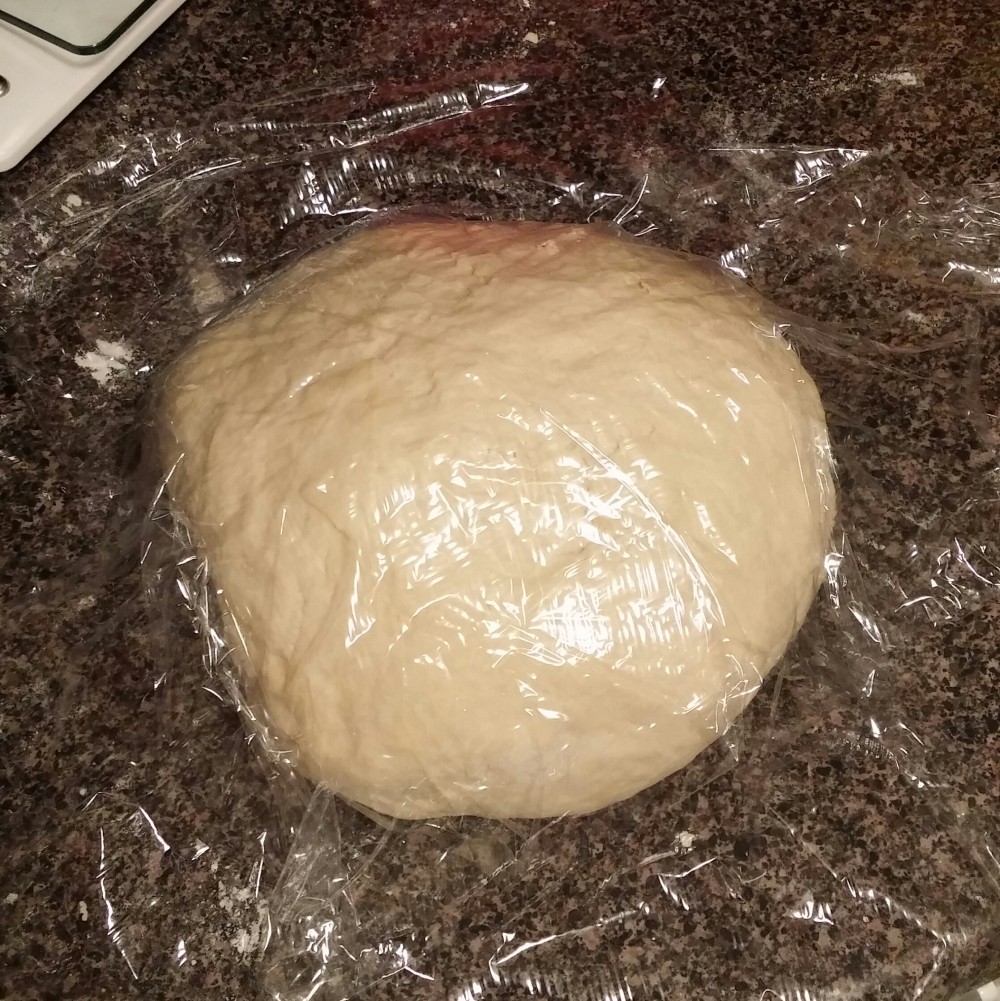 If only I had a Nancy Meyers kitchen. Life would be so much easier.

Time to make the loaf! Again, I’m told to stretch the dough into a rectangle and, unlike the last two times, this one is a little easier because the dough is more firm than elastic. 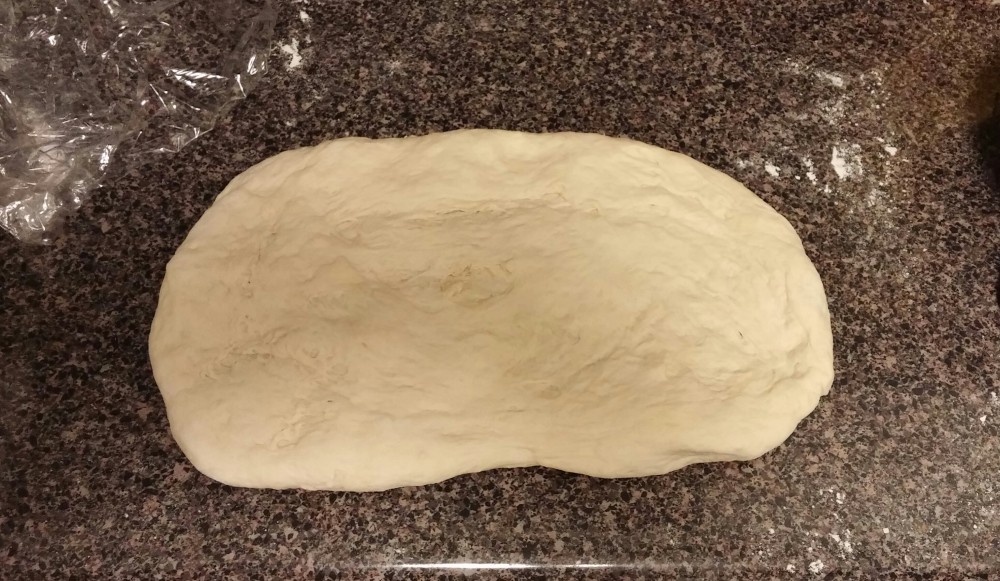 Fear not! That’s what’s supposed to happen. Apparently it requires firminity (let’s pretend that’s a word) in order to hold its shape because it’s not in a loaf tin. Makes sense.

The whole pinch-and-roll thing is kind of difficult with dough that I’ve been fighting with. It’s like it knows. Or it’s like I didn’t knead it long enough.

Does this look good enough? 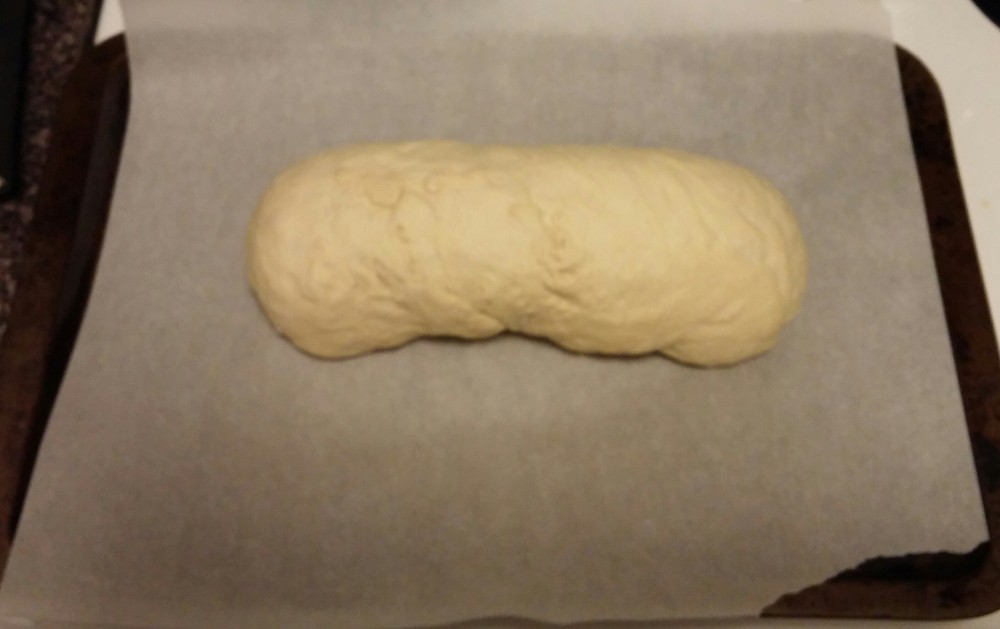 I guess the pinch-and-roll is to avoid air bubbles, but I’m not sure I did it justice. Not sure of anything anymore!

A fun fact about myself is I don’t do well with making mistakes. But according to Ms. Frizzle, that’s exactly what we’re supposed to do, so instead of trusting that voice of self-doubt in my head, I’m going to trust my favourite teacher and take chances, make mistakes and get messy.

Also can we just have a sidebar about how great it is kids these days now love The Magic School Bus? My niece and nephew love both the Frizzles! And I love that they love them.

I’m to use the scale and measure out 12 equal-sized rolls. The scale told me the weight of the second half of the dough was 1088 grams which means each roll needs to be 90.66666666666666 etc. grams. I ended up dropping a dot of dough onto the floor, though, so I think it worked out to be exactly 90 grams each.

Note to self: remember to pick up that dot of dough.

And forming them into “neat balls” is a lot harder than it seems. I don’t want there being air bubbles, so I tried to pinch like I did for the loaf, but it was a lot more difficult. And then hoping that they won’t rise all weird. And then trying to arrange them on a lined baking sheet but realizing they would definitely rise into one another, so I had to pull out a pizza sheet as a back-up.

I guess what I’m trying to explain is my small living room is littered with three trays of garbage-bag-wrapped pre-breads. I’ll save you the photo for which you’ll judge me because my living room is a true mess.

Just another way I’m listening to The Frizz.

You know when you preheat your oven and you can’t remember if you heard it beep? I was debating just putting the bread in the oven and then, thankfully, heard it beep, so I knew I was putting it in at the right temperature.

But first I had to “work quickly” and brush with warm water, cover with poppyseeds: 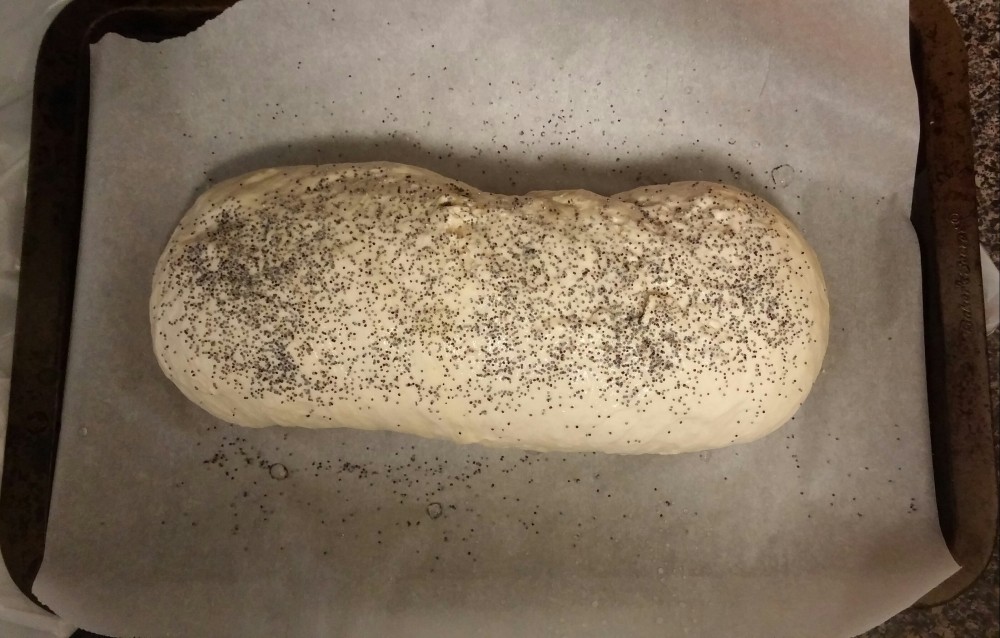 And, with a serrated knife, slash it. Apparently 13 is the ideal number of slashes but I only fit 11. Hope that’s okay, Mary and Paul.

Also, I had to put a roasting tin on the bottom of the rack to fill with water and create steam. But I have no roasting in. I was trying to figure out what would be best. I was worried that a pie plate or a casserole dish would explode being close to the element so I went with my loaf tin. If that gets ruined, I can get a new one at Ikea.

And now I wait again.

So much waiting with this recipe! And the waiting is so much worse when you’re fairly certain you ruined it.

I peeked and the bread is HUGE! I’m worried the dough will just continue to grow and it’ll be a comical bread-baking adventure that I feel like Roald Dahl would write about.

The bread is almost done so I decided to prep the rolls. It’s hard to criss-cross-cut soft yeasty bread, in case you were wondering.

I hope both of these things fit in the oven.

As for the bread… 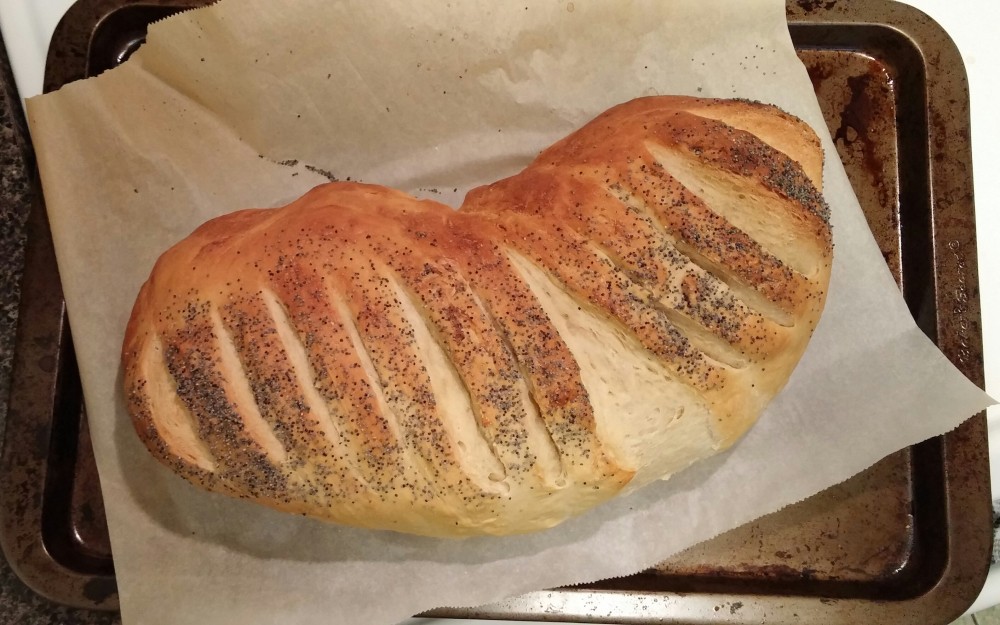 I’m not sure what happened.

I may have to rotate the rolls halfway through part two. Or part fifty, whatever part this is.

I’m worried about the rolls. Mary and Paul also didn’t tell me to create steam for these, but I tried. But what if the serrated knife didn’t work or what if there’s too much dough in there? What if I can’t rotate them? What if opening the oven to rotate them causes them to deflate? What if I really ruined this thing?

Also what if half the loaf is raw and the other half is overdone? It doesn’t look great.

I need to stop worrying.

The buns aren’t done and I just cut into the less-done edge of the loaf. Raw.

Paul would be ashamed.

I wonder if I can put it back in the oven.

I need a bigger oven.

Okay I think the buns are done:

So I’m going to put the bread back in, which is probably a massive faux pas but I’m just making do here!

I did, however, burn my knuckle on a pan when rotating the buns and I also burned a hole through my bag of Chicago Mix popcorn: 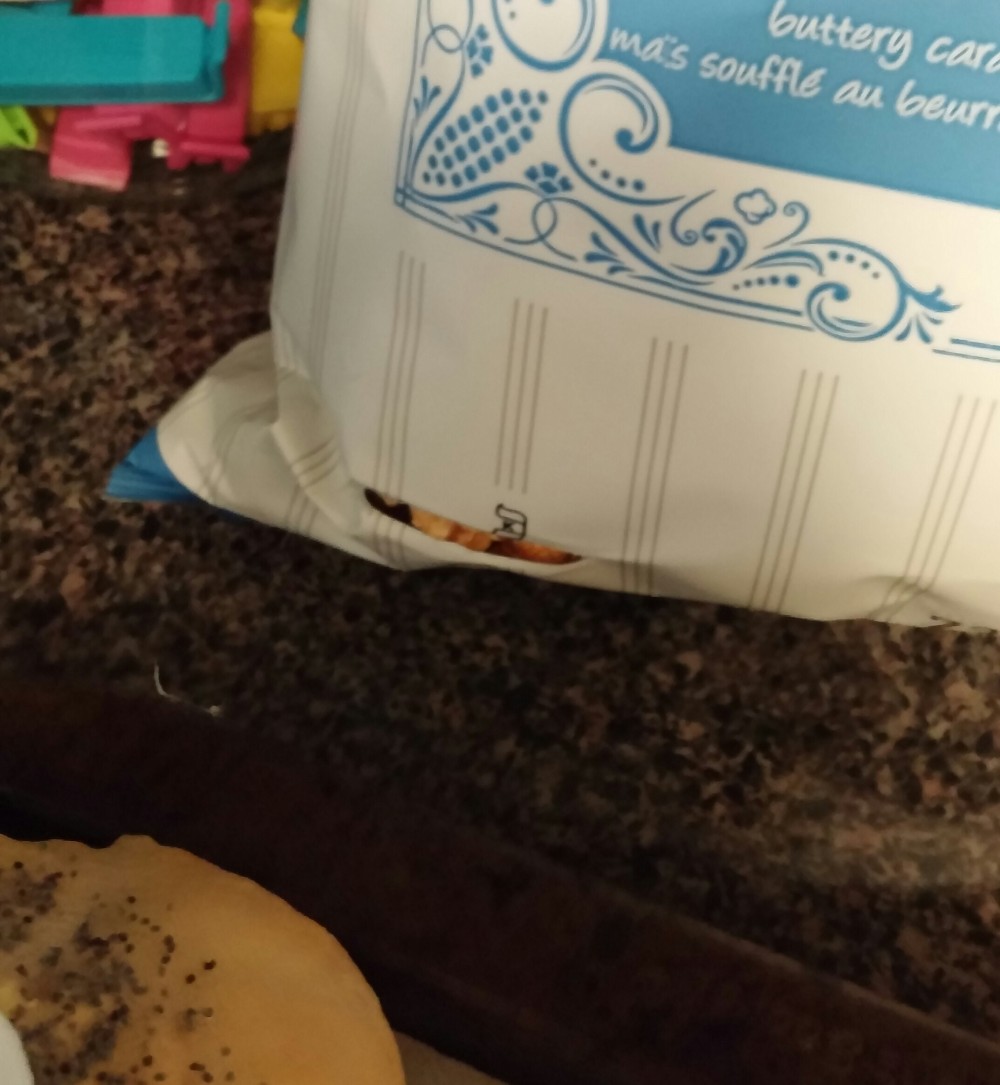 Gotta say, this hasn’t been my best work.

I was just wondering why that burned knuckle hurts so bad. Turns out, I burned a paper cut. That’s not great, eh?

But the bread seems improved!

Time to pack up.

UPDATE: It was actually delicious. The rolls disappeared within a few hours because the kids requested seconds. And even though the loaf looks like a kidney bean, it’s presumably as tasty as the buns.